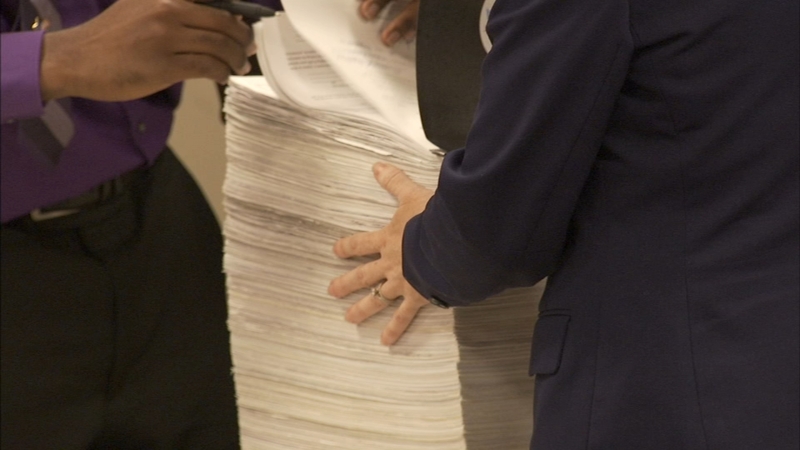 CHICAGO (WLS) -- The deadline for challenges to petitions filed by candidates seeking to run for Chicago mayor were due at 5 p.m. Monday, and the allegations and denials were flying.

Last month, 21 candidates filed their petitions to run for mayor. Exactly 12,500 signatures are needed, and many candidates submitted significantly more.

Candidates use the challenges to knock out their biggest challenger, or whoever might take away votes or money. Signatures can be disqualified if they are ruled fake, the signer does not live in Chicago and other reasons.

Susana Mendoza turned in her nominating petitions with twice the required number of signatures, and it made her a prime target for challenges. She was on vacation with her family on Monday, but her campaign managers were on the offensive.

They accused rivals Toni Preckwinkle, Bill Daley and Gery Chico of conspiring together to knock her off the ballot -- something all three campaigns denied.

"They stooped this low because it's part of the old guard politics tricks," said Marty Castro, a Mendoza co-campaign manager. "They want to cling to power, they know the biggest threat to that power and their controlling city hall is one person, and that's Susana Mendoza."
"Oh come on, conspiring, fake news, give me a break, this is the law, when you're running for office you follow the law, and as I said, Comptroller Mendoza has taken advantage of the law and thrown other people off the ballot in other races, so it's a little disingenuous," Daley said.

Daley's petitions were challenged by Jerry Joyce's campaign. In response, Daley campaign spokesman Jorge Neri said: "We have not seen the Joyce challenge. However, we are looking into questionable tactics surrounding the Joyce campaign's challenge and our team will take appropriate action with the proper authorities as necessary."

Preckwinkle's campaign is challenging Lori Lightfoot, Dorothy Brown and Mendoza who they alleged had 14,000 questionable signatures, which -- if true -- would leave Mendoza short of the required amount. She also is challenging two other minor candidates.

In response to Preckwinkle's challenge, Lightfoot said: "We're confident that we've got the signatures necessary to get on the ballot, full stop. .... Petition challenges are the old Chicago way-and so is Toni Preckwinkle. Preckwinkle lacked the courage to take on Emanuel and aligns herself with the likes of Berrios and Burke, so it's no surprise that she's trying to take out the only independent reform candidate in this race. It won't work. While Preckwinkle plays the political games of the past, I'm looking towards the future and working hard every day to build a transparent and accountable City Hall."

Willie Wilson's campaign said it would challenge Dorothy Brown, LaShawn Ford and Ja'Mal Green. Green complained the process hurts democracy and drains resources from candidates who have to fight the challenges.

It does not appear anyone challenged Preckwinkle, Vallas, Chico or Amara Enyia.

Daley, Mendoza, McCarthy and Chico did not challenge anyone, per their campaigns.

"We went through a rigorous process to verify our signatures and feel confident with what we filed. Given Bill's desire for greater access to the ballot, we chose not to file challenges against any candidate," said Neri, of the Daley campaign.

The Board of Elections spokesman said voters might not know who's on the ballot for quite some time.

"The ballot's not gonna take shape until one of those last weeks in January. And some of these cases may go to court and my drag into February," said Jim Allen, of the Chicago Board of Elections.