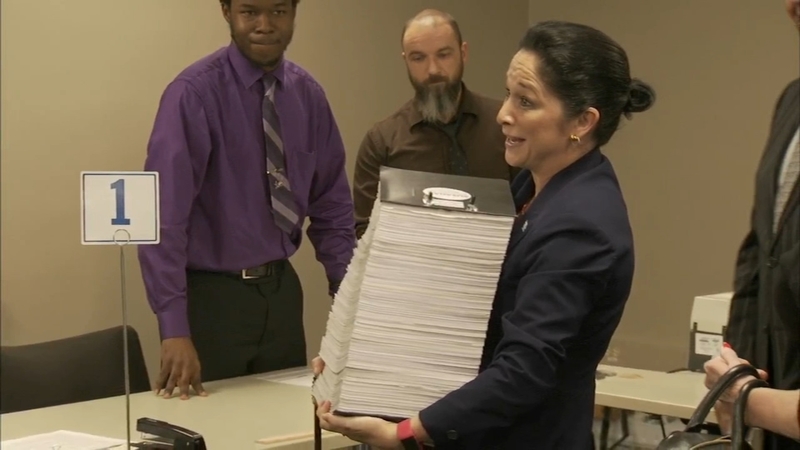 CHICAGO (WLS) -- The field for Chicago's mayoral race is officially set as 5 p.m. Monday was the deadline for candidates to file their petitions.

The minimum number of signatures required to run for mayor is 12,500 signatures. But the because of challenges, candidates usually get two-to-three times more than that to make sure they get on the ballot. Voters registered in Chicago can only sign one candidate's petition.

Bill Daley arrived with his 45,000 petitions and a proposal to ease those requirements.

"I think the legislature's got to look at this whole process and say, 'What's a real number?'" he said. "We're much higher than any other major city. It ought to be lowered."

Daley's idea was greeted with mixed reactions from the other candidates filing Monday.

Daley was the first one in line at the Chicago Board of Elections, turning in 45,000 petition signatures. His proposal would also call for allowing people to sign more than one petition.

Garry McCarthy was also present Monday, turning in 55,000 signatures in his bid for mayor. He initially had 65,000, but knocked off 10,000 questionable ones.

"I'm seeing that this system is kind of set up to work towards the incumbent, and I think that that's not fair," McCarthy said.

The next step for candidates is deciding whose signatures they might challenge in an effort to disqualify potential rivals. No one seemed concerned about defending their own.

"I'm not, because we've already done our verifications and we're running 70-80 percent accuracy. And so we're not worried about it at all," said Dorothy Brown, who turned in 25,000 signatures.

Gery Chico was the other big name present Monday morning, turning in his own stack of 32,000 signature petitions.

"As for the 12,500, look, I think there ought to be some rigor here," Chico said. "This is a very important office. There's a lot of people's lives that are impacted by who this individual will be."

RELATED: Read the list of all the candidates who have filed to run for Chicago mayor

With the snow that fell overnight and Monday morning, the candidates answered questions about Chicago's time-honored snow storm tradition of parking spot dibs.

"I'm nowhere on dibs. Where are you on dibs?" Daley said. "No, I wouldn't outlaw dibs."

"I think that's bad idea. It just causes conflict. Anything that causes conflict, I think, is a bad idea," McCarthy said. "I didn't know it was a campaign issue. I'll work on that."

"Well, you know what, I'll say this about dibs. I used to do it myself, OK? When I'd shovel out my parking space, I'd put a chair, I'd put a bench, I'd put a 2X4, whatever I had there," Chico said. "I think if you're going to spend an hour shoveling out, an hour and a half shoveling out you're space, you ought to be able to use it."

Brown said she was unfamiliar with dibs.

"Oh, that kind of dibs? We don't do dibs in my neighborhood," she said, later clarifying that she supports the concept.

Susana Mendoza, who threw her hat into the race less than two weeks ago, arrived with only 25,000 signatures, but remained confident. Amara Enyia, who has garnered the support of Chance the Rapper and Kanye West, came in with 62,000 and an entourage. Neither woman plans to challenge others' signatures.

"I'm just focused on running for mayor so it's not my intention to challenge anybody. I think democracy's a good thing," Mendoza said.

Some candidates prefer to wait to file within the last hour, as they're entered into a lottery to be in the bottom slot on the ballot, which tends to catch more voters' eyes. State Representative LaShawn Ford, former Chicago Police Board President Lori Lightfoot, former Alderman Bob Fioretti, entrepreneur Neal Sales Griffin and community activist Ja'Mall Green all filed within the last hour.

The candidates who filed on the first day of the filing period will be entered into a lottery to be in the top slot on the ballot, another eye-catcher.
Report a correction or typo
Related topics:
politicschicagoloopchicago mayor electionelectionpolitics
Copyright © 2021 WLS-TV. All Rights Reserved.
RELATED 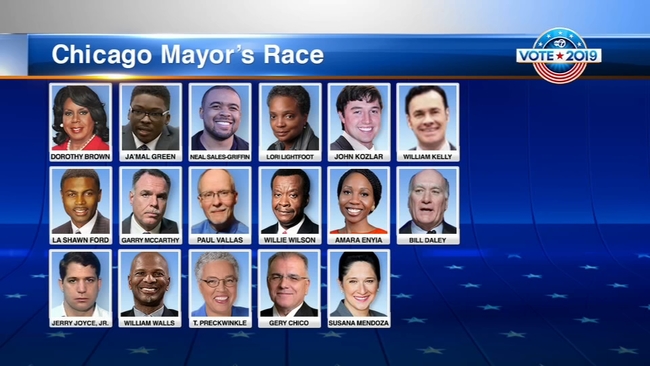