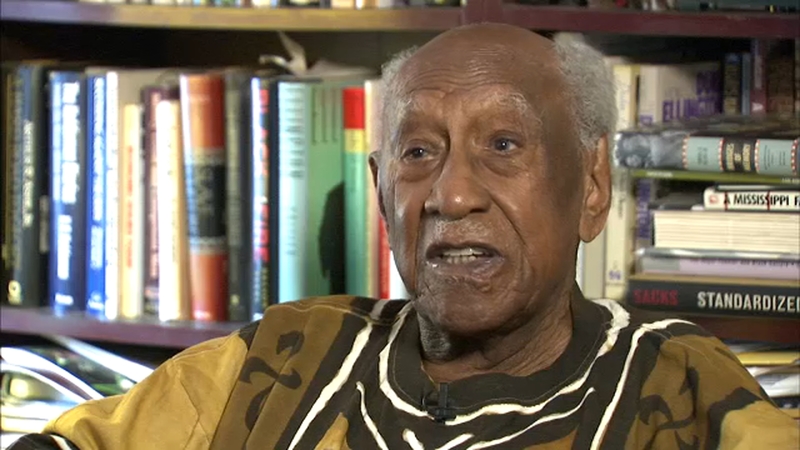 CHICAGO (WLS) -- Celebrations will be held this weekend for Chicago historian Timuel Black, who is turning 100 years old.

Black, who has appeared on ABC7 to talk about the city's history, came to Chicago as an infant in 1919. He survived the Great Depression and made supply runs to the front lines during World War II.

Black, who lives in the city's Bronzeville neighborhood, grew up in Chicago in what was then called the "Black Belt." His family was part of the first Great Migration from the segregated South.

Within that culture was an expectation to improve upon life from previous generations and take full advantage of Chicago's promises.

"I hung out with the young hoodlums," Black said with a smile. "That was fun. But Momma, would not allow that to be the goal. They both felt that education was a way to get out of that poverty."

He would become a high school teacher, college professor and author.

After a century, Black sees progress -- and problems -- that still exist. But he is inspired by a new wave of young leaders and offers them advice or encouragement.

"I feel an obligation to continue to help as I was helped," he said.

Black's knowledge and his own story reminds us of the significance of the past as he looks to the future.

"Keep the faith. Take care of yourself. Go to bed at night and get a good night's sleep, and start all over tomorrow," he said.

Black will release his third book, Sacred Ground, about growing up on the South Side. He will be awarded France's highest decoration for military service -- the Legion of Honor.

Black's calendar in the coming days is full as his wife, Zenobia Johnson Black, hosts birthday celebrations throughout the weekend.

Click here for more information about "The Life and Times of Timuel D. Black: A Centenary Symposium" event