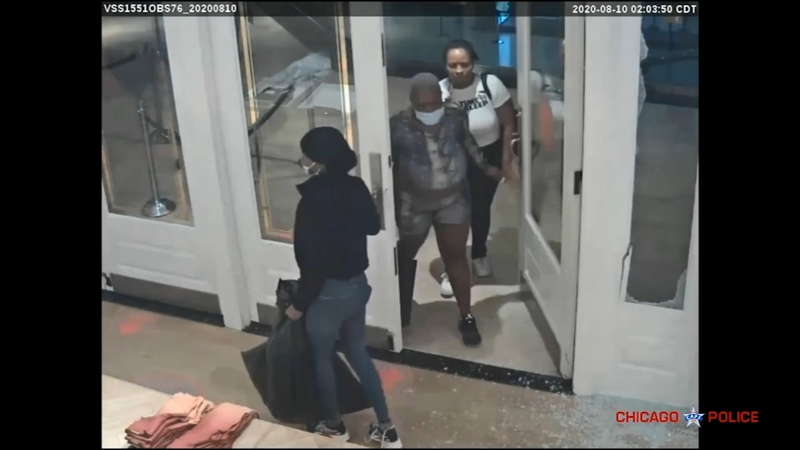 CHICAGO (WLS) -- For law enforcement in Chicago the resurgence of looting this week has created an all-hands-on-deck situation, with the FBI tonight zeroing in on on several aspects of apparently organized attacks. FBI officials in Chicago tell the I-Team they have received "several hundred" leads from the public since creating a dedicated digital media tip line on Monday following the overnight looting.

New video of early Monday looting shows women with a lug wrench bashing in a window at the Pink store by Victoria's Secret, which is on the fourth floor of the famous Water Tower Place. Authorities now looking for this woman and her alleged accomplice. One of them unlocks the front door for two more unidentified women who walk in.

Experts say the aim is to put names with faces and determine if it was all part of an overarching plan by a street gang or other organized crime group, that could result in a federal conspiracy case.

"You're trying to make a determination if it's just lone individuals, not connected, or if it's a concerted effort in conspiracy," said Jeff Cramer, former assistant U.S. Attorney in Chicago.

He says the feds have jurisdiction with the possible addition of conspiracy charges or suspicion of moving stolen goods across state lines. Federal authorities also have jurisdiction over the ATM attacks Monday as they did with similar crimes during the Chicago riots in late May and early June. Tonight, the FBI says they've had "significant activity" all summer with ATM robberies and bank heists.

In Chicago, just Bank of America alone has been hit by ATM looters more than three dozen times this summer. 37 ATMs damaged in the past few months according to a Bank of America spokesperson, 35 damaged in May and June, two so far in August. Tonight, the Cook County State's Attorney Kim Foxx says her office has now charged 42 people with felonies from the attacks earlier this week-more than half charged with looting or burglary.

West Side business owner reeling after being looted for 2nd time

Thursday evening Chicago Police Superintendent David Brown stood before a backdrop of dozens of photos of alleged looters detectives are looking for to discuss the city's weekend safety plan.

"What I want the looters to learn is how committed we are to not only stopping the looting, but if they escaped working tirelessly to find them punish them and prosecute them," Brown said.

Small business owner Mo Zahid, whose store got hit by looters, wonders what will happen if they try again.