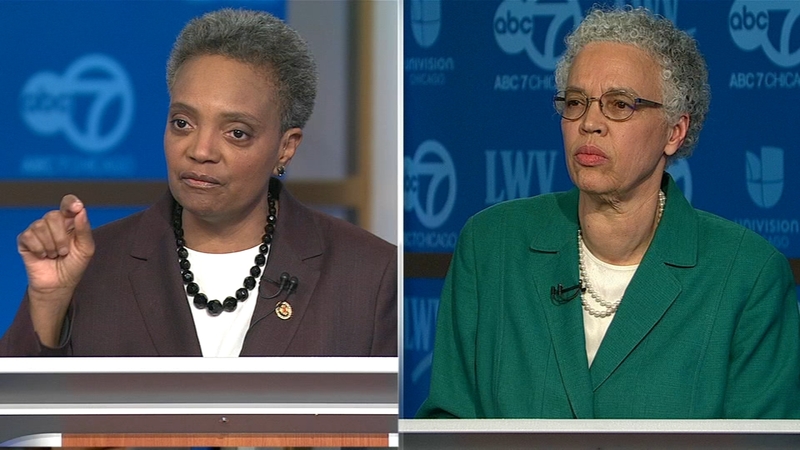 CHICAGO (WLS) -- Chicago mayoral candidates Lori Lightfoot and Toni Preckwinkle squared off in a mayoral forum presented by ABC 7 in partnership with the League of Women Voters and Univision.

The two candidates sparred before and then after about who can be the change agent the city needs, and then in the one moment where the candidates got to ask a question of one another, Preckwinkle went on the attack.


Lightfoot posed a question to Preckwinkle about the historic nature of two African American women vying to be Chicago's next mayor that turned the tone of the debate.

"President Preckwinkle I want to give you the opportunity to talk about what that historic event means to you," Lightfoot said.

Preckwinkle called it historic, but then quickly changed the topic and launched her attack, which she later described as simply compare and contrast.

"Let me just say while I was transforming our health care system and increasing access and improving the quality of care my opponent was working for a law firm that defends tobacco companies and polluters," Preckwinkle said.

"They've chose a strategy from the night of the February 26th election that their path to victory is to try to demonize and destroy me, to make me look like something other than I am," Lightfoot said after the debate.

Lori Lightfoot speaks after The Race for Chicago Mayor: The People's Forum

They also sparred over change versus experience.

"The idea that she would suggest that change is easy is just a manifestation of how little you understand of how government works," Preckwinkle countered.

Toni Preckwinkle speaks after The Race for Chicago Mayor: The People's Forum

"The way that the party did in this last cycle where it said this judge does not deserve to be retained and we worked hard to defeat that judge," Preckwinkle said.

"I don't think we can be doing a victory lap when in the history of the Democratic Party selection of judges, that one judge got singled out," Lightfoot responded.