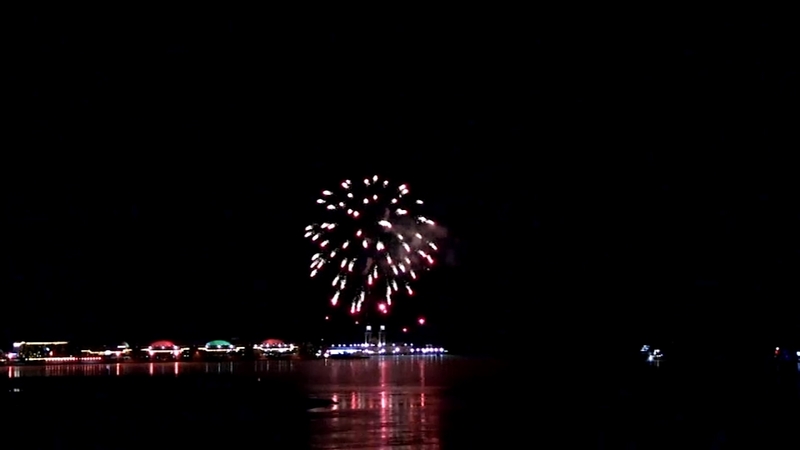 CHICAGO (WLS) -- As Chicago prepared to enter the New Year, venues across the city worked with Chicago police to ensure celebrations were safe.

Nearly 100,000 people were expected to flood Navy Pier and the surrounding area for the longest light show to ring in 2019. Spokesperson Payal Patel said security was a top priority for the pier.

"We've got more police officers," she said. "We're working very closely with CPD, CFD, federal agencies to ensure that this is a very safe place."

Revelers planning to ring in the New Year at the pier were asked to arrive early to go through security checkpoints. Police told partygoers to leave large bags and backpacks at home.

Police are stepping up patrols throughout the city after a group of teens attacked passengers at a CTA Red Line station over the weekend.

Video shot by a passenger on a Red Line train shows a huge crowd of teenagers headed downtown early Saturday evening. According to 2nd Ward Alderman Brian Hopkins, they were all together as part of an organized group.

The group went into the H&M store and ran out with a large quantity of merchandise. Others also apparently caused problems at the McDonalds restaurant at the corner of State Street and Chicago Avenue.

"We have numerous reports of people being struck, pushed, shoved," Alderman Hopkins said. "The only serious injuries that we're aware of occurred on the Red Line station. We do have indications that the activity was organized activity. It was preplanned. There was communication on social media."

RELATED: 3 attacked by dozens of teens on Red Line platform on Near North Side

The alderman said the trouble in the neighborhood Saturday lasted about three hours. Police are reviewing video from CTA surveillance cameras hoping to identify suspects.

Meanwhile, police say they plan to have extra officers at a number of Red Line stops to keep large groups from gathering.

"We're adding officers down there so they'll see officers almost on every corner because we want people to be safe in any part of the city," said CPD Superintendent Eddie Johnson.

There's also a new fireworks show along the Chicago River this year. It stretches from Lake Shore Drive to where the river splits into the north and south branches. The fireworks will be launched from barges and bridges so there will be road closures.

The Riverwalk will also close at 10 p.m. The new fireworks show starts at midnight.

Binny's Beverage Depot stores across the Chicago area saw a surge of last-minute party preppers for those celebrating at home with friends.

"This is insane. I've never been in a liquor store this large so it's a lot of fun; it's a great experience," said Austin Fellows, who was shopping Monday afternoon. "We're kind of just running around, perusing the aisles, picking out what we want."

If you're staying in tonight, be sure to ring in the New Year with ABC 7. Countdown Chicago will be at the parties, all over the city and suburbs. The fun begins at 11:08 p.m.

If you're celebrating in the suburbs, there's still plenty to do.

Brookfield Zoo's annual celebration is already well underway, and younger participants made noisemakers to ring in 2019.

For those in search of a higher-end, grown-up party, the Oakbrook Hilton Hotel is hosting a Rat Pack-themed celebration. The hotel has established itself as a hot New Year's Eve location.

If you do raise a glass of champagne too many, remember to be safe. In Palos Park, the police department is offering safe rides home - all you have to do is call.

"The Chief of Police works on New Year's Eve, so he comes out, and if anyone needs a ride home from a local establishment, a party, someone who's visiting in town and had too much to drink, we give them a ride home to surrounding communities," said Palos Park Police Department Commander John Sawyer.