Chicago police shootings: Families of teen, man killed by CPD react to news of no charges 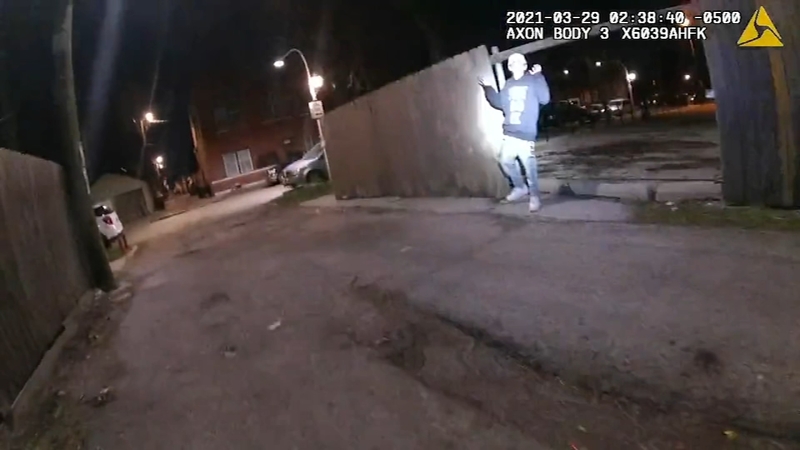 CHICAGO (WLS) -- The families of Adam Toledo and Anthony Alvarez are both speaking out after Cook County State's Attorney Kim Foxx said officers would not be charged in the two high-profile police shootings.

Just a few weeks before the one-year anniversary of two fatal Chicago police shootings, Foxx said the officers who shot and killed 13-year-old Toledo and 22-year old Alvarez will not face criminal charges.

"This is a sober announcement as there are no winners in this very tragic situation," Foxx said during a press conference Tuesday afternoon.

Both families are now saying they'll pursue their own lawsuits against police, and the Little Village Community Council is expected to hold a news conference Wednesday outside the Cook County State's Attorney's Office.

There will also be a rally demanding charges at Federal Plaza Wednesday night.

Toledo was shot and killed by CPD Officer Eric Stillman in the Little Village neighborhood on March 29, 2021.

Bodycam video showed Stillman and the 13-year-old running down an alley around 2:30 a.m. Video released by COPA appeared to show Toledo dropping the gun by a fence. Less than a second after the officer ordered the teen to drop the gun, Stillman fired, striking Toledo in the chest.

Bodycam video shows Adam Toledo had his hands up and was not holding a gun when he was shot, but less than a second earlier appeared to have a gun in one hand, which he tossed away.

"Officer Stillman reacted to the perceived threat presented by Adam Toledo, who he believed at the time was turning toward him to shoot him," Foxx said.

Attorneys for Toledo's family said in a statement, in part: "Despite that decision, we will continue fighting for Adam and have filed our civil complaint seeking monetary damages against Officer Stillman and the City of Chicago in our effort to get justice for Adam and the Toledo family. Officer Stillman's use of deadly force was excessive and posed a threat to the safety of Adam and others."

Days later, Anthony Alvarez, 22, was shot and killed by CPD Officer Evan Solano in the Portage Park neighborhood on March 31, 2021. He was walking through a gas station parking lot when he encountered police on foot, and Foxx said he was not committing a crime at the time.

Video shows Officer Solano running after Alvarez, shouting at him to drop the weapon, and then Alvarez dropping the weapon as he fell to the ground after Solano shot him twice. An autopsy revealed he was shot in the back and the thigh.

Foxx made the announcement Tuesday afternoon, nearly a year after the shootings, saying prosecutors concluded they could not meet the necessary burden of proof.

"Police officers are often forced to make split-second decisions and judgments in circumstances that are tense, uncertain and rapidly evolving," Foxx said.

But Foxx said that mistakes were made by police that led to use of deadly force in the Alvarez case.

"It is important to highlight that the officers themselves created the conditions which the use of deadly force became necessary," Foxx said.

Foxx added that evidence showed that a foot pursuit of Alvarez was not necessary at the time. Officer Solano may have also committed several foot pursuit police violations, which Foxx said "may have further exacerbated the conditions that led to this deadly encounter."

"Despite this, this, the law for us to charge a criminal case is based on the reasonable belief of imminent death or great bodily harm at the time of the shooting," Foxx said. "The burden of proof in a criminal case is much different from the burden of proof used to determine whether policy violations will lead to adverse employment consequences."

Foxx said that decision will be made by the Civilian Office of Police Accountability.

Expressing their disappointment, the family of the young father said, in part, "Family members are committed in their efforts to bring justice for Anthony, which includes holding the Chicago Police officers involved in the shooting accountable for their actions. We hope that Kim Foxx and her office continues their investigation into the reckless and inexcusable conduct of Officer Evan Solano."

An attorney for the Alvarez family said in a statement: "I do not believe for a split second that Anthony posed any type of risk of harm to the officers on March 31, 2021...He was visibly frightened from the way they approached him at the gas station with their vehicle and was trying to run away."

Alvarez's family has filed a federal lawsuit in connection with his death.

"I'm both angry and disappointed, more angry at the decision of no charges to both officers. I was in shock when I heard that," Alvarez's father Oscar Martinez said.

Both deadly police shootings in the spring of 2021 sparked outrage in the Latino community, garnering calls for a suspension of foot pursuits and the implementation of a new foot pursuit policy by CPD.

"We were shocked and outraged Kim Foxx didn't file any charges," said Little Village Community Council President Baltazar Enriquez. "She claimed there wasn't enough evidence, but evidence is there, black and white. We're still dealing with the trauma. We have not coped with the trauma because we have not gotten the individual who killed Adam Toledo put in jail. He's still out there. He's still going to get paid, still going to get his pension."

Now nearly a year later, activists said they're still feeling the sting of these deadly shootings and struggling in the fight for changes in policing.

"The city is sending a clear message that the immunity the police department has, where you can kill anybody and go free," Enriquez said.