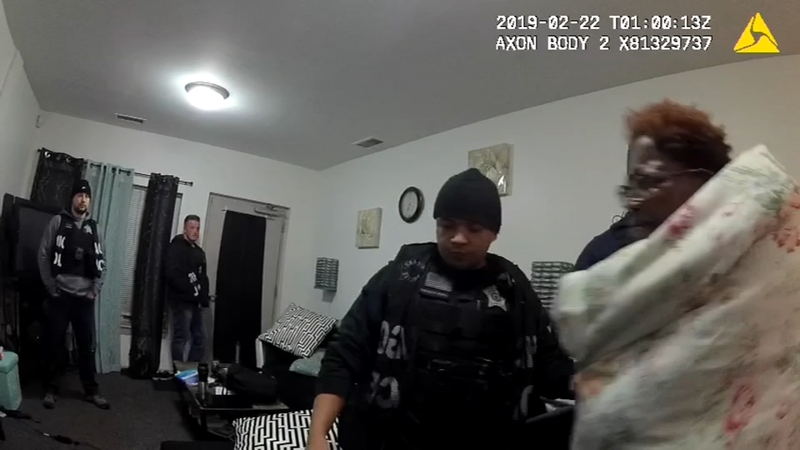 CHICAGO (WLS) -- Thirteen months ago the Civilian Office of Police Accountability first opened its investigation into the botched raid on social worker Anjanette Young's home in February 2019. But the delay as it turns out isn't unusual.

It was part of the first City Council hearing on the case.

Speaking during the virtual committee hearing, COPA Administrator Sidney Roberts said part of the delay has been because they have yet to interview Young.

"Prior to recent news coverage, COPA attempted to secure and interview of Ms. Young on seven, seven different occasions over the course of several months to no avail," said Roberts.

That interview, along with efforts to speak to the 12 police officers involved, are now underway.

The hearing for a botched raid called for witnesses from CPD and COPA.

Chicago Police Superintendent David Brown told aldermen Tuesday he will look to standardize who conducts raids and how they are served, ban no-knock warrants unless necessary to save human life, develop mechanisms to review search warrant outcomes, implement scenario-based training for officers
and change the department's culture.

"Even the perfect search warrant policy without human decency is flawed," said Brown. "So we must ensure human decency and dignity as central to our culture."

A collective of leaders and organizations demand the city council to release all videos and emails related to the raid. They want transparency as well as accountability for the City of Chicago, Chicago's mayor and the Chicago Police Department.

"When Anjanette was standing nude in her house and the police were prancing around her, ignoring her, they were dehumanizing her. She was invisible," said Crista Noel, Women's All Points Bulletin.

Two other departures took place late Monday: Caryn Jacobs from the Deputy Corporation Council and Kathy Fieweger, director of public affairs for the law department. No reason was given.

"Until the COPA investigation is complete, these officers need to be off the street. But that investigation needs to be handled and come to conclusion in an expeditious way," Mayor Lightfoot said.

A day after the mayor sought and received the resignation of Corporation Counsel Mark Flessner, the fallout continues to mount following last week's broadcast of a nearly two-year-old police bodycam video.

Eleven police officers and one police sergeant who raided the home of Anjanette Young last year have been placed on desk duty while COPA investigates, the mayor said.

"Our officers are always the first in line to be thrown under the bus. You mean to tell nobody in the mayor's inner circle knew about that video prior to Tuesday, like she's claiming she didn't know," Catanzara Jr. said.

Last week, it came to light that the city's law department tried to block the video of the raid on an innocent woman's home from being released. The footage shows Young, handcuffed and with no clothes on.

Mayor Lightfoot announced that her senior ethics advisor Celia Meza has been appointed to lead the Chicago Law Department on an interim basis.

"There is no excuse that this matter has languished for a year without any significant movement on the part of COPA. We all need to understand the particulars of why Ms. Young's house was targeted, what happened while the officers were there and importantly what happened afterwards," Lightfoot said.

"She's probably going to fire more people, the people who she will say did not inform her. But it raises questions about why would, why in an administration like this would they not more on top of this," said ABC7 Political Analyst Laura Washington.

"Our officers are always first in line to be thrown under the bus," said Fraternal Order of Police President John Catanzara. "You mean to tell me nobody in the mayor's inner circle knew about that video prior to Tuesday, like she's claiming she didn't know either."

The city is conducting a review of why Young's FOIA request was denied.

Two of the city's most influential aldermen stood beside the mayor Monday to announce hearings into the matter.

"We will be having a top-to-bottom legislative hearing tomorrow at 11 a.m.," said 29th Ward Alderman Christ Taliaferro, who also serves as chairman of the Public Safety Committee.

Alderman also want to introduce policy changes into how search warrants are issued, how complainants can gain access to bodycam video, and how the city's law department deals with litigation against it.

"We will be in session tomorrow righting some of the wrongs that have been done, and move into a place everyone can feel safe in their own home," said 28th Ward Alderman Jason Ervin.

"We are going to take the reins and lead the city in the direction we want to go," said 5th Ward Alderman Leslie Hairston. "No more talk about reform. It's time for action, and bold action."

Aldermen want to abolish the practice of issuing warrants based only on information from a paid informant, and to create a standardized warrant application process with a way to track cases.

All CPD officers involved in a botched raid at the wrong home in 2019 have been placed on desk duty, and the City Council will start hearings on the raid and aftermath on Tuesday.

"We will do the legislative fixes that need to be done and hold the appropriate parties accountable," Ald. Ervin said.

The mayor was not be at the joint committee hearing Tuesday morning. Some aldermen said she should have to testify in front of the city council.

For the mayor, what happens next could be defining.

As head of the city's law department, it was Flessner who signed off on the legal filing that sought to stop the public from seeing the video.

In a statement, Flessner denied being part of a cover up.

Young's lawyer Keenen Saulter said he had no comment on Flessner's resignation Sunday.