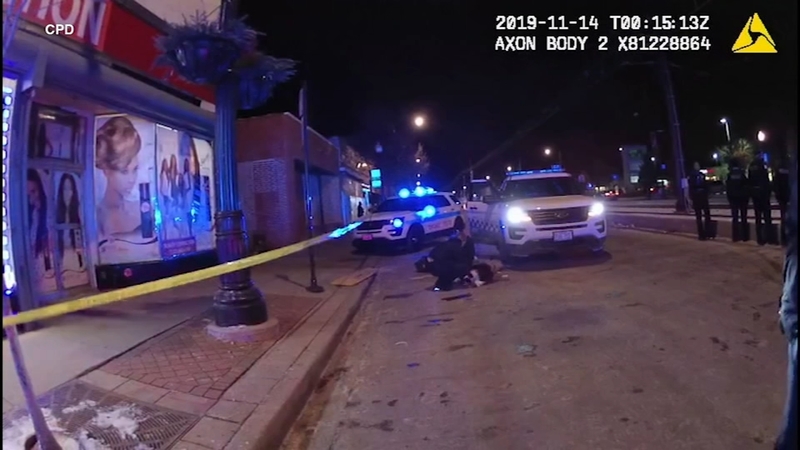 CHICAGO (WLS) -- More than a year after a woman was hit by a Chicago police squad, video from the scene has been released after a community organizer sued the city.

Police body cam video showed Martina Standley, 32, approaching the squad car, reach for the light and knock on the windshield. The car then lurched forward and knocked Standley to the ground. This caused her head to hit the pavement and her leg to be pinned under the car. She appeared to be unconscious.

The incident took place on Nov. 14, 2019 at 71st and Jeffery on Chicago's South Side. The officer is heard saying he meant to put the car in reverse on his body cam.

Standley sued the city and will give her deposition next week.

"Martina Standley is lucky to be alive today because that officer used that vehicle as a weapon, and Martina did not do anything to provoke that type of response," said Andrew Stroth, Standley's attorney.

Standley, who worked as a pizza server, underwent surgery and considerable rehab after the accident but has not been able to return to work.

William Calloway, a community organizer, fought the city for a year before a judge ordered the city to release the video.

"It's unfortunate under a new mayoral administration, under a new superintendent, we're still fighting for transparency," Calloway said.

Mayor Lori Lightfoot said Tuesday she did not see the video and was not familiar with the case, so she could not comment.

While Mayor Lightfoot's administration is under scrutiny for this case as well as other videotaped incidents involving police, she said a plan that would provide civilian oversight of police is still under work.

"What's more important is getting a structure that makes sense, that is reflective of true community oversight, but also is supportive of the work that must be done regarding the consent decree and striking balance," Mayor Lightfoot said.