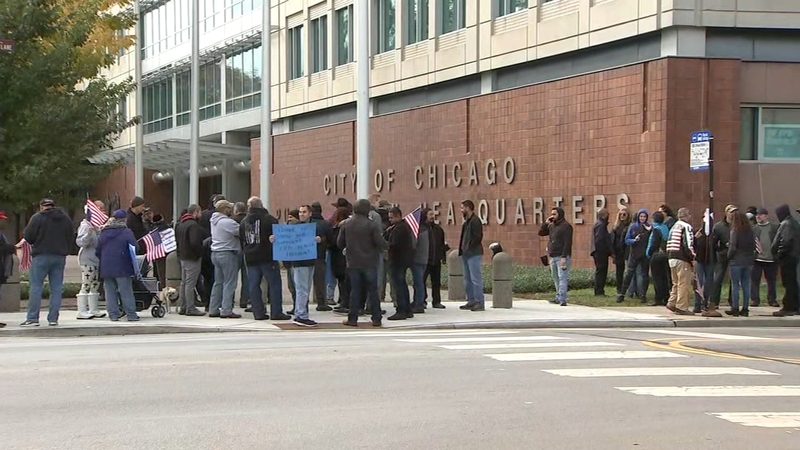 CHICAGO (WLS) -- The battle over vaccine mandates played out in federal court in Chicago Tuesday afternoon with a group of city workers suing both Mayor Lori Lightfoot and Illinois Gov. JB Pritzker.

A federal judge said late Tuesday that he will rule on Friday on a city worker lawsuit asking for a temporary restraining order to put the vaccine requirements on hold. That case involved 130 employees, mostly firefighters.

Earlier, their police counterparts - who are fighting a separate battle in Cook County Court - staged another demonstration at police headquarters. The protest came one day after a rally outside City Hall led by Chicago FOP president John Catanzara Jr.

Chicago police officers, family and supporters rallied in a show of unity. Among the 50 or so demonstrators were several officers who have been stripped of their police powers and sent home without pay for refusing to report their vaccination status.

"This is my husband, Timothy Fellman. He's one of the 23 stripped. I'm his wife. And, you know, we feel very passionately about this. We feel passionate about freedom. It's not the city's business to go into people's health status, it's wrong," Grace Giampa said.

The Fraternal Order of Police had called for a massive show of support from the more than 3,500 officers who have so far declined to report their vaccination status. He organized the rally to send a message to the mayor and police superintendent about how many officers are willing to risk losing a paycheck to take a stand against the requirement.

So far, only about two dozen officers have been put on no-pay status. But a late night memo from police brass warned them to instead report to their own police districts, or face further discipline.

"Talk about creating a hostile work environment and threatening people and treating your employees the way they're treating," Catanzara said. "It's disgraceful."

The FOP president is pushing for daily testing while the mandate challenge continues to play out in court.

If the federal judge grants the TRO, it could block the vaccine reporting mandate for 14 days pending a preliminary hearing on the merits of the case. The FOP, meanwhile, is still waiting for a hearing on their request for a TRO.