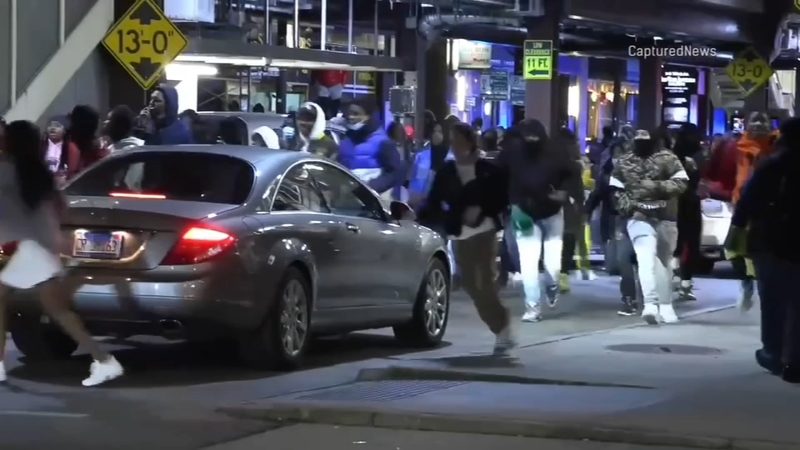 CHICAGO (WLS) -- Chicago police are stepping up patrols and canceling days off to try and keep downtown safe this weekend.

"I just wouldn't want anything like this to ever happen to anybody else," the CTA bus driver's wife said. "It affected my boys. It affected my life ... on a way that you have no idea."

That's why the CTA bus union is taking their own actions to keep workers safe by hiring a private security company. They also plan to hold a march from City Hall on Saturday.

"It's not necessarily even the CTA workers that are scared, but the actual people that are driving, the commuters," community philanthropist Early Walker said. "So, it's a safety issue all around."

Chicago Police Supt. David Brown said the department is canceling officers' days off and saturating the central business district with cops in an effort to deter large crowds from creating havoc.
"If you come downtown or anywhere else to engage in disorderly conduct or other crimes you will be arrested," Brown said at a press conference Friday.

Chicago Police Superintendent David Brown warned that anyone looking to create disorder will be arrested.

It's a plan to combat violence downtown after last weekend when mobs of young people flooded downtown streets and Millennium Park last weekend, creating major disturbances and even fighting and injuring a CTA driver.

Over 20 juveniles were either arrested or issued violations for reckless behavior.

"How do we stop this from happening, rather than allow it to happen and try to make arrests and quell the violence?" 2nd Ward Ald. Brian Hopkins said.

Hopkins said parents need to take more responsibility for their children after a 15-year-old boy was arrested and charged in the attack of the CTA bus driver.

"We did have contact with one of the parents," Hopkins said. "My understanding was he was supposed to be brought down for further processing and to appear in court. That didn't happen, So, clearly there is a problem with this. If the parents don't take it seriously, you can't expect the teenagers to take it seriously."

The problems are creating real concerns from shoppers who fear for their safety coming into retail stores, especially after recent large group retail thefts.

With the recent uptick in crime, Cook County State's Attorney Kim Foxx is rethinking her retail theft policy to not prosecute felony retail theft unless the value of the stolen items exceeds $1,000.

Mayor Lori Lightfoot blames retailers for not doing their part to protect their own stores, by hiring security or having more security cameras.

"Those are unfortunate comments," Hopkins said. "The mayor needs to stop blaming other people... It sends the wrong message. It says that we're not the ones who are supposed to solve that problem. We're the government! We run the police department. We're the ones who have the burden to solve this problem."

Brown is hoping more resources on the ground will help this weekend, and it's not just downtown.
"Yes there is a plan, not only dealing with our violence, but also retail thefts we've seen outside of downtown as well as in downtown," he said.

The I-Team reported earlier this week that an internal CPD memo obtained was sent to commanders Tuesday afternoon and includes details of a plan to prevent what happened last weekend from happening again. In addition to canceling officers' days off so more uniformed police can flood downtown streets, commanders are being told to review CPD's months-old plan for closing off the central business district.

Superintendent Brown said the plan would remain in place in the weeks to come.