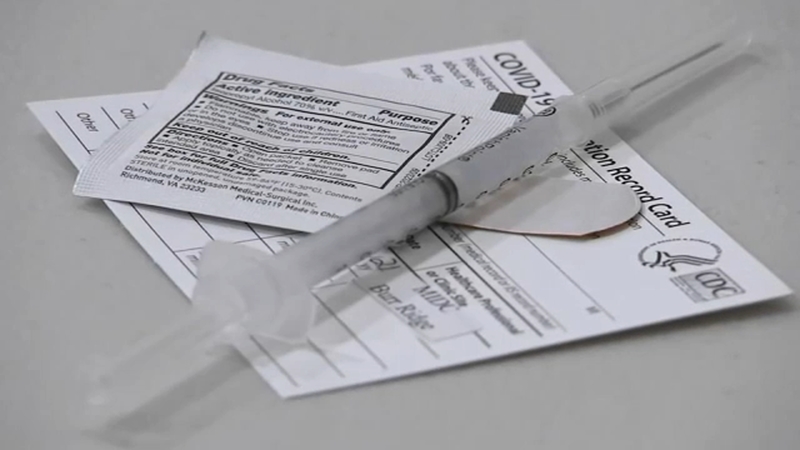 CHICAGO (WLS) -- Chicago police officers were being stripped of their police powers and sent home without pay Monday for refusing to comply with the city's vaccine mandate.

The city is taking action as it releases data showing compliance levels across all city departments.

The mayor promised they would take action against city employees who did not comply with her reporting mandate, and police brass moved quickly to send a message to officers and other employees who refused to follow orders, starting with those working at CPD headquarters.

Chicago Mayor Lori Lightfoot says 79% of city workers have complied with the vaccine mandate so far, with 84% fully vaccinated.

At police headquarters, the disciplinary process has begun for thousands of officers who did not meet the Friday deadline to upload their vaccination status to a city portal.

Officers are being brought in for counseling sessions where they were given direct orders to report their vaccination status. If they refuse, they are sent to human resources, where the city swiftly takes disciplinary action.

"At that point, human resources will give you another opportunity to go on the portal. If you do not go in the portal at that point and comply, you are placed in a no-pay status and you are stripped of your police powers immediately," said Fraternal Order of Police President John Catanzara Jr.

The mayor said similar steps are being taken against employees in any department who did not comply with the reporting requirement.

"It must be clear; it's not an action against the FOP," Lightfoot said. "I deeply believe that the only way that we can maximize safety in our workplace is by getting our employees vaccinated."

According to data provided by the city, 79% of employees have reported their vaccination status.

The department with the lowest level of compliance was the police department. 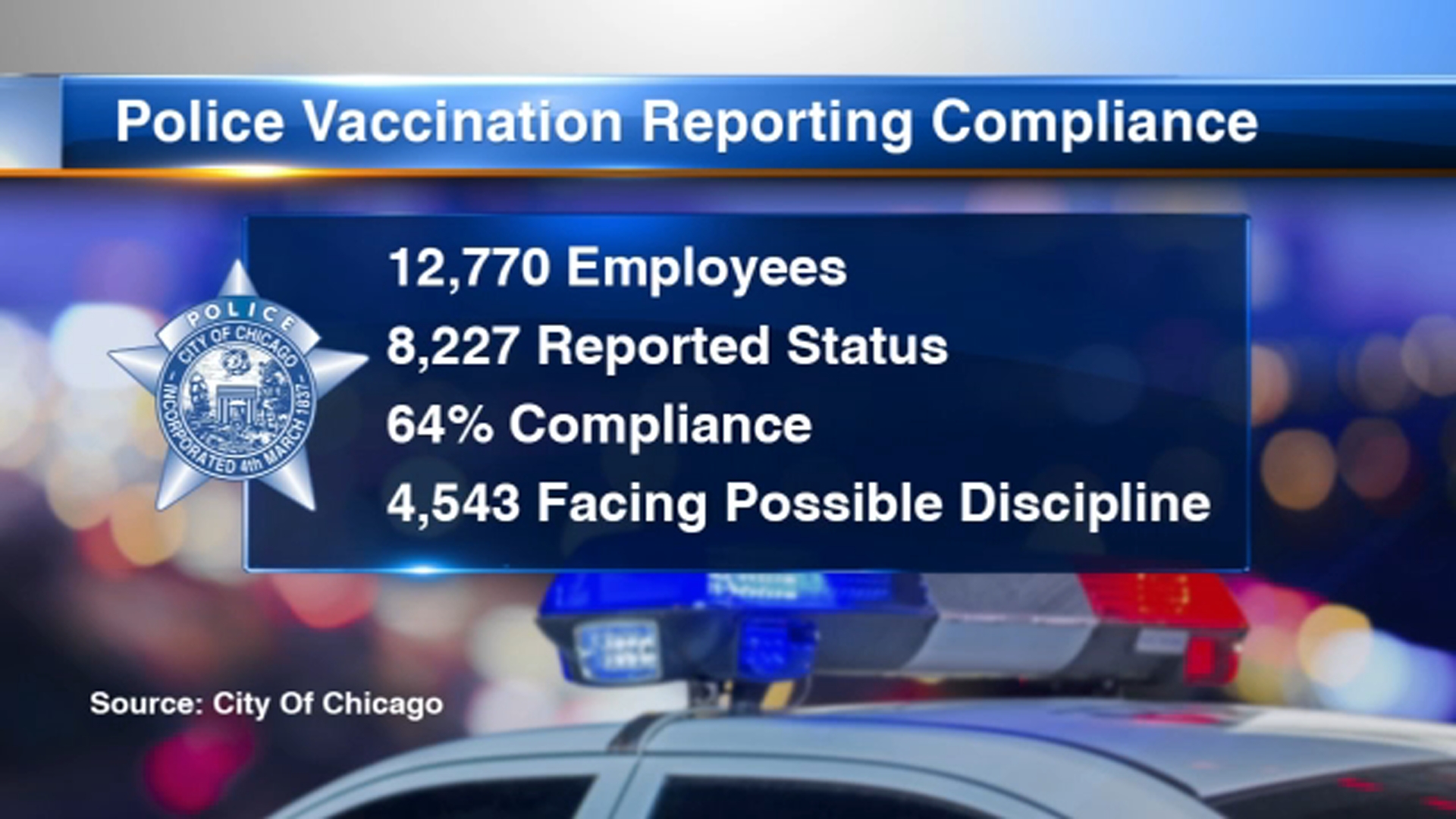 According to data provided by the city, 79% of employees have reported their vaccination status. The department with the lowest level of compliance was the police department.

Of the 12,770 police employees, only 8,227 reported their vaccination status, which is just 64%. The remaining 4,543 employees now face possible disciplinary action if they continue to defy orders.

Overall, the city is reporting that 79% of employees have reported their vaccination status, and of those 84% are fully vaccinated.

"If you take out police and fire employees, the percent jumps to 96%, and 81% of respondents are fully vaccinated," the mayor said. "[A] very small percentage of cops are refusing to comply when directed to do so today."

The Cook County State's Attorney's Office is reporting 99% compliance with its vaccine requirement.

However, the FOP claims that because the city did not fairly bargain over the vaccination mandate, the order to report their status is invalid. One legal expert said the union is on shaky ground.

"The general approach is obey now, grieve later. That is, if you think an order is improper, you're still expected to obey it and then file a grievance and fight it our afterwards," said Martin Malin, a retired labor law professor for Kent College of Law.

The mayor said she does not believe that very many of the police officers who were brought in Monday continued to remain defiant against her mandate.

But Officer Elizabeth Alaniz said she's on no-pay status after refusing to comply.

She said she wants to support other officers like her son, who responded to the scene the night Officer Ella French was fatally shot.

On Wednesday, the two sides go back to court with the FOP asking the judge who heard the case Friday to recuse herself.

This comes as the Chicago Police Department released two memos over the weekend regarding non-compliance with the mandate.

The Fraternal Order of Police convened a member meeting for the second time this past week on Sunday at its West Loop headquarters, as the Friday deadline for all city workers to comply with Chicago's vaccine mandate requirements has come and gone, and a day after CPD issued an initial memo Saturday, effectively limiting officers' ability to take time off until further notice.

The move is meant to shore up manpower in preparation for the city to potentially take large numbers of officers off the streets for defying the mandate starting this week.

A second memo, obtained by the I-Team, was distributed throughout CPD Sunday. The latest memo threatens the firing of officers who do not follow the city's vaccine policy, and orders it be communicated to officers at all police roll calls.

That memo is a significant escalation in the standoff that has been going on between City Hall and the Fraternal Order of Police over the last week.

The memo escalates contention between Mayor Lori Lightfoot and the Chicago police union.

"TO BE READ AT ALL ROLL CALLS FOR SEVEN (7) CONSECUTIVE DAYS. This AMC message informs Department members of consequences of disobeying a direct order to comply with the City of Chicago's Vaccination Policy issued 8 October 2021 and being the subject of the resulting disciplinary investigation. A Department member, civilian or sworn, who disobeys a direct order by a supervisor to comply with the City of Chicago's Vaccination Police issued 8 October 2021 will become the subject of a disciplinary investigation that could result in a penalty up to and including separation from the Chicago Police Department. Furthermore, sworn members who retire while under disciplinary investigations may be denied retirement credentials. Any questions concerning this AMC message may be directed to the Legal Affairs Division via e-mail," the memo said.

Members at the Sunday meeting were still discussing a plan to fight back against the mandate.

The latest memo, which was issued at 8:16 p.m. Sunday as the FOP was adjourning, is a significant escalation in the standoff that has been going on between City Hall and the Fraternal Order of Police over the last week.

FOP posted a response on social media shortly after the Sunday memo.

"Still think this is about COVID or public health?? This mayor is a complete and utter joke. She is the epitome of hypocrisy. This is plan and simple union busting. The other city unions better wake up. Today it's us under attack. Tomorrow it will be you if you challenge this tyrant. We will not relent," the post said.

A photo with the post showed Lightfoot at the Chicago Sky game, posing for a picture, maskless.

Alderman Ray Lopez is also very vocal about combating crime in his Southwest Side ward, and hopes for a resolution.

"My hope is that calmer, cooler heads prevail, and that they will get back to the negotiations table, not only for our police, but all city employees, so that we don't see any reduction in vital city services we provide to our residents, including keeping them safe in their neighborhoods," Lopez said.

The prospect of a compromise seems distant, however. Lightfoot's threat to place those in defiance of the order in a no-pay status remains in place, as does the FOP president's previous statements regarding just how many officers might choose to simply walk away.

"This notion that individual officers get to be insubordinate as they choose, as they pick and choose, we're not having that," the mayor said last week.

RELATED: FOP pres. posts video after ordered not to talk about vaccine mandate

"Roughly 38% of the sworn officers on this job, almost 40% can lock in a pension and walk away today," Fraternal Order of Police President John Catanzara Jr. said.

Lightfoot even took the matter to court, threatening that officers would break the contract with the city if they strike or walk off the job.