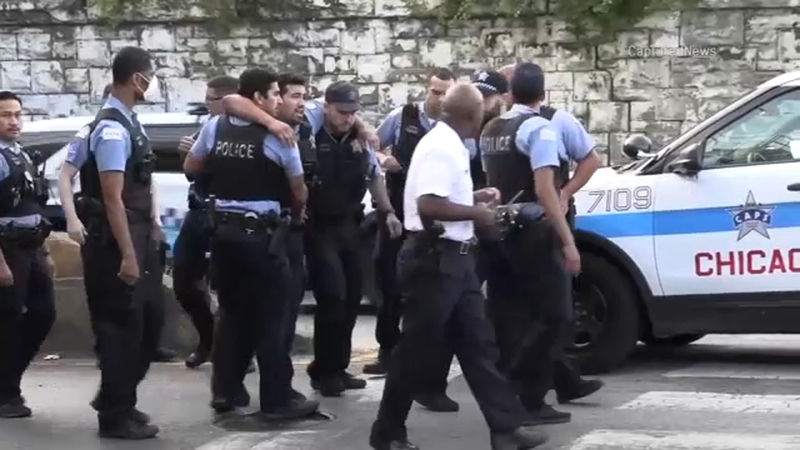 CHICAGO (WLS) -- Slung over the shoulders of his colleagues, a Chicago police officer hobbled to a nearby SUV after being seriously wounded on the South Side.

The officer had been hit and dragged by a car fleeing a traffic stop, according to police.

About 7 p.m., there was an altercation between an officer and an offender in the 6300 block of South State Street, Chicago fire officials said.

The officer was then dragged by a vehicle for about 40 feet, fire officials said.

Moments after hitting the officer, Teccara Murphy said she saw the fleeing driver dangling from the car.

"He had his door open like he was going to jump out of the car," Murphy said.

Murphy said the driver sideswiped her SUV as he sped off near 63rd Street and Wabash.

"Flying up 63rd with the door wide open and I thought maybe he was going to get over but he didn't. He actually swerved into my lane, hit my car and continued. Flew around the corner like a bat out of hell," Murphy described.

"We seen him coming this way and the door was already open so it was more, 'what are you doing?' We were trying to swerve and get away from him," Fowler said.

Police said officers had been conducting a traffic stop when the offender suddenly reversed and dragged the officer, pinning him between the suspect's fleeing car and a viaduct.

This latest incident comes during a chaotic and uncertain time for Chicago police; and happened just a few miles from where Officer Ella French was shot and killed, and her partner badly injured Saturday night during a traffic stop.

Police found the black Chevy impala not far from the crash at 61st and Indiana, as others helped another injured colleague in uniform to the same hospital where French's partner is slowly recovering.