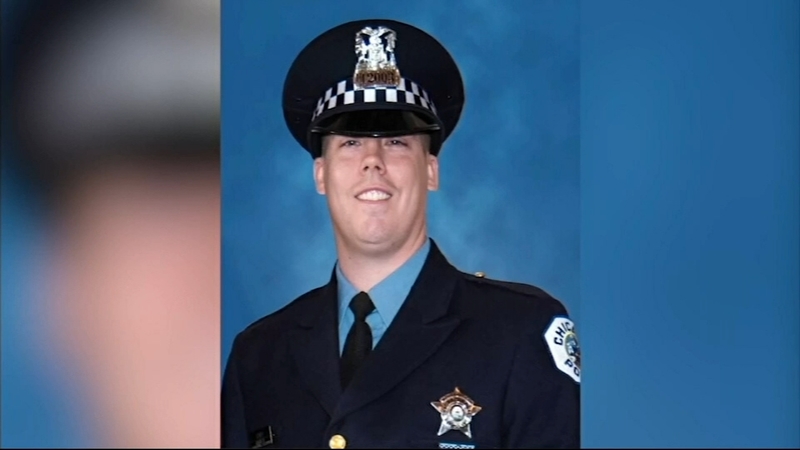 CHICAGO (WLS) -- A wake was held Thursday for one of the two Chicago police officers hit and killed by a train on Monday evening.

Hundreds lined up Thursday afternoon to pay their respects to the family of Officer Conrad Gary.

Gary and fellow CPD Officer Eduardo Marmolejo were were fatally struck by a commuter train Monday in the Rosemoor neighborhood while they were pursuing a man who was seen firing shots in the area, police said.

Gary's wake comes as the man Gary and Marmolejo were pursuing, later identified as Edward Brown, faced a judge for the first time.

Both officers were married with children, their loved ones grieving just days before the holiday.

"I know there are thousands and thousands of people praying right now for these two families," said Father Dan Brandt, directing chaplain, Chicago police. "I hope they're feeling the effects of that prayer and all the love and support from not only the police department family but the city of Chicago, a grateful city."

Gary, 31, was the father of a 6-month-old girl and had only been on the force for 18 months. Public service was still a major part of his life prior to his service in the CPD, however, as he served in the Air Force. Gary's Air Force unit and Mayor Rahm Emanuel were among the mourners, many of whom never even met Gary. To them, he's a heroic stranger.

"I think it says what people across this great city feel," said Matthew O'Shea, 19th Ward alderman. "We all owe a great debt of gratitude to our police officers."

The wake's tremendous turnout was bittersweet for those that knew him.

"It's sad, emotional. You're happy that people are honoring him, but at the same time, it's not the way you want," said Jean Huggy, a friend of Gary's.

Inside the Oak Lawn funeral home, CPD Superintendent Eddie Johnson led the St. Jude dedication, a final show of respect for Gary's service to CPD and the city.

Gary's wake marked the beginning of what will be a long healing process for a South Side police community that lost two officers at once.

At St. Rita of Cascia Shrine Chapel, a mosaic of police and firefighters has been permanently installed. The chapel, which can seat 1,000 people, has hosted countless funerals for first responders. The funerals for these two officers come just days before Christmas, adding to their families' grief, said Father Bernie Scianna, director of the St. Rita Shrine.

"So it can be overwhelming to provide some comfort for the family to know that the place where they're gonna have these services is cared for by us and we're gonna provide whatever we can to give them some comfort in the midst of this grief," he said. "Not only the families but the police department."

Kevin Graham, president of the Fraternal Order of Police, echoed that sentiment.