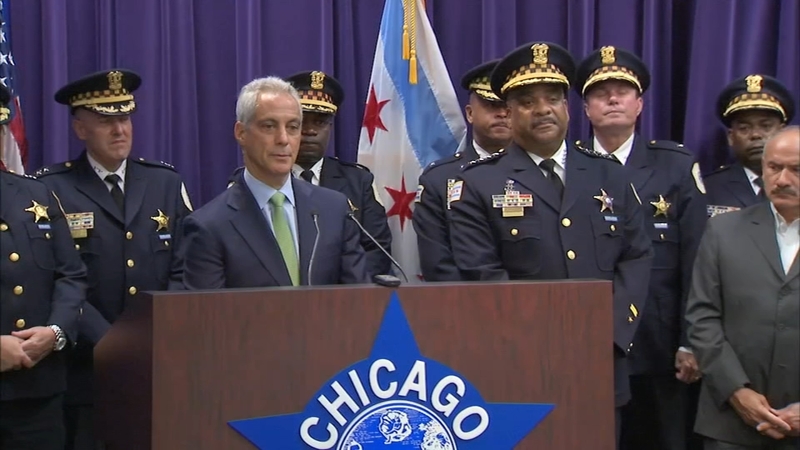 Emanuel, who just returned from a trip to China, urged "public servants, protesters, faith leaders, police, community leader and residents" to use this incident to learn from each other.

Speaking for the first time since the shooting, Emanuel praised the Chicago Police Department for quickly releasing body cam footage of the shooting of 37-year-old Harith Augustus, a barber who had a young daughter, but said he would withhold judgement on the propriety of the shooting until the investigation by the Civilian Office of Police Accountability is complete.

Body cam video was released less than 24 hours after the shooting, which appears to show Augustus with a gun and him reaching for it before he was shot.

"I think the superintendent did exactly the right thing, which is to get one video out for public safety reasons so people got the information," Emanuel said.

The mayor's remarks followed an event honoring nine fallen police officers and their families. Johnson joined him to further explain why the body cam, which appears to have been activated after Augustus was shot, does not contain audio which would clarify what led to the confrontation.

"When they activate it, when they encounter a citizen and activate it, it buffers back to the previous 30 seconds. The audio comes in at the moment they physically activate it," Johnson explained. "The technology does not support the capture of the entire video and entire audio for the entire tour of duty."

All of the officers were wearing body cameras, but releasing the videos would be up to the Civilian Office of Police Accountability, or COPA, which is investigating.

Emanuel said that COPA would release all the videos when they finish their investigation.

The shooting sparked three consecutive days of protests, some of them violent, as activists criticized the police department's handling of Augustus, who appears to be in the process of showing a police officer his firearms license when a second officer grabs his arm. That action initiates the struggle that led to him being shot after he's seen apparently reaching for his waistband.

"I really believe if they had kept it calm like the first, professional officer did, who represents CPD in the proper manner, I think the young man would be alive today," said Reverend Ira Acree.

On Saturday night, police tried to detain Augustus outside a store near West 71st Street and South Jeffery Avenue for carrying a gun.

Less than 24 hours later, CPD released a portion of one body-camera angle.

Augustus appears to open his wallet before officers surround him. One officer grabbed his wrist, then Augustus turns away into the street. As that happens, police said they believe he reached for a gun in his waistband. That's when the officer started shooting.

A demonstrator who was arrested during Saturday night's violent protest was charged with three misdemeanor counts of obstructing or resisting a police officer.

The shooting investigation is in the hands of the Civilian Office of Police Accountability, or COPA. Officials said more police video will be released when it's available, no later than 60 days after the shooting, per standard procedure.

The city could see a fourth day of protests Tuesday over the Chicago police shooting that killed 37-year-old Harith Augustus over the weekend.