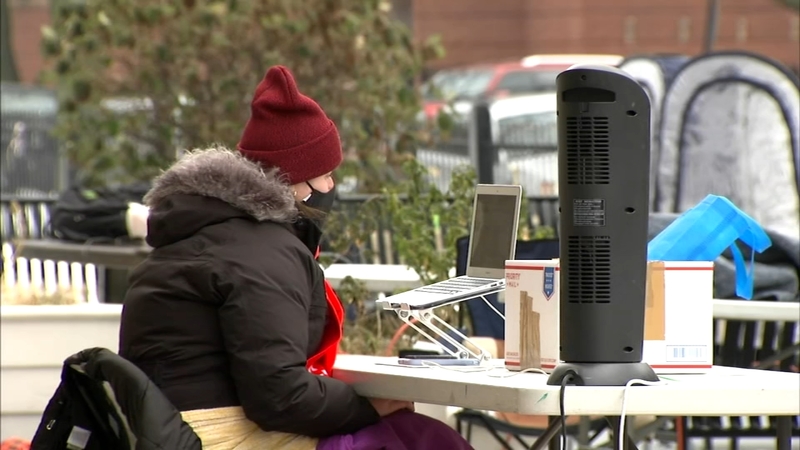 CHICAGO (WLS) -- Some Chicago Public school teachers who were ordered to report to their classrooms Monday set up remote work stations outside their buildings, but on school grounds.

Pre-K and special education teachers returned to classrooms Monday, but Chicago Public Schools could not provide a percentage of how many teachers reported to school.

With temperatures hovering below freezing, some teachers at Brentano Math & Science Academy bundled up and set up tables and computers outside so they could still teach virtually.

"It's chilly, but the parents are incredibly supportive," said Kirstin Roberts, a pre-K teacher at Brentano.

The teachers reported to school, but refused to step inside - opting instead to teach from outside - as many said they still did not feel that it was safe to enter the building.

The Chicago Teachers Union said some of its members chose not to return to school buildings Monday morning in defiance of the district's reopening plans. The CTU said the district hasn't taken enough precautions to keep students and educators safe.

"Under CPS' current reopening plan, health and safety are threatened but the quality of education that our students receive is also threatened," said Annie Kellogg, a special education teacher at Brentano.

"You also deal with ventilation, you also need to deal with cleaning and sanitation, we have a bad experience in the past Chicago Public Schools, so they have made promises that they haven't delivered," said CTU President Jesse Sharkey.

The CTU and some aldermen argue CPS has a trust issue, and the pandemic makes returning to the classroom unsafe at this time.

"This is what really should be scaring all of us, this new UK variant of COVID-19," said Ald. Carlos Ramirez-Rosa, 35th Ward. "If you look at what's coming out of the UK, this is much more contagious. It's much more deadly. It's impacting small kids."

Tameeka Chalmers' 13-year-old son Antwaun attends school on Chicago's South Side. He has cerebral palsy and struggles with remote learning. Chalmers said he needs to be back in the classroom and she's frustrated with the Chicago Teachers Union's pushback.

"To me, nothing is going to be good enough for them," Chalmers said. "I don't care if they go in and put in new pipes and new ventilators and humidifiers, they're gonna find something wrong with that plan."

Pre-kindergarten and some special education teachers returned to school buildings Monday morning ahead of their students, who are slated to start in-person learning next week.

"We're taking everything day by day depending on what happens today and we're focusing on our lessons and our plans day to day. We've communicated with parents, parents are in support of us," Kellogg said.

CPS maintains that its planning efforts, coupled with city health guidelines give them confidence that a return is safe. The district issued a statement and said, in part, "...CTU's last-minute tactics are deeply disrespectful to the 77,000 mostly Black and Latinx families who selected in-person learning."

Chicago Public Schools gave details about its return to school plan for some students, while the Chicago Teachers Union remains opposed to a return to classrooms.

"We are working with our health experts and they support our school reopening," said CPS Chief Education Officer LaTanya McDade. "It's also important to note that families in Chicago who pay for their education are reporting to school in person. Families who use public education, they should have that same in-person option because it has been proven to be safe."
While the teachers union is not barring its members from complying with the district's plan, it has advised teachers to continue remote teaching until they believe the buildings are safe.

The teachers who went inside Monday made their own individual decision to do so, as the union is not on strike. Teachers said the district has threatened disciplinary action if they choose not to come.

"We were told that we couldn't stay home, that we would be fired," Roberts said.

CPS and the city continue to assure the public that the efforts they have taken since planning in March, coupled with city health guidelines, gives them confidence students and staff can return safely.

CPS issued a statement in response to the union that read:

"The overwhelming scientific evidence, expert guidance and experiences of school districts across Illinois are clear: schools can safely reopen with a comprehensive plan in place. The CTU has not identified any area where the district's plan falls short of public health guidelines and the CTU's last-minute tactics are deeply disrespectful to the 77,000 mostly Black and Latinx families who selected in-person learning. It is the district's expectation that teachers without an accommodation report to work tomorrow, just as principals, custodial staff, engineers, and food service staff have throughout the entirety of the pandemic."

The district claims the return to in-person learning will help alleviate the educational disparities seen in the city's Black and brown communities.

"If you want to talk about equity, let's talk about staffing our buildings appropriately," Torres said. "Let's talk about meeting the needs of kids where they are and not creating an expectation that is unrealistic."

CTU is also getting the support of 33 Aldermen who penned a letter to the district and Mayor Lori Lightfoot, urging both sides to come up with a collective transparent plan.

"We need to spend a lot more time doing in the coming days and weeks, is improving that reopening plan so that it builds more confidence, it builds more trust and CPS and the families and teacher that servicing," said Alderman Matt Martin, 47th Ward. "We need to make sure we are addressing public safety concerns, public health concerns specifically in ways so that people can understand, but also situating it within this equity framework because if we're just having a small portion of our CPS population comfortable within in-person learning there's a lot more work to."

CPS did issue a response back to the Aldermen address on each point of concern from safety protocols to the communication with the union.
EMBED More News Videos

"While there was uncertainty about the safety of schools when we knew far less about COVID-19, these positive health outcomes are no longer a surprise. Data from schools throughout Illinois, across the country and around the world confirm what is now the scientific consensus: schools are safe when proper mitigations are followed," the response said in part.

Last month, a group of 17 Chicago area doctors signed an open letter in support of the district's plan, saying in part, "The educational, psychological and financial hardships of remote learning have had serious consequences for our children and their families," and added that, "in-school spread of COVID-19 is rare when proper precautions are taken."

Additionally, all school staff returning in-person will be given monthly COVID-19 tests as part of the district's testing program.

The district only expects about 37% of eligible students to return to in-person classes, officials said earlier in December.