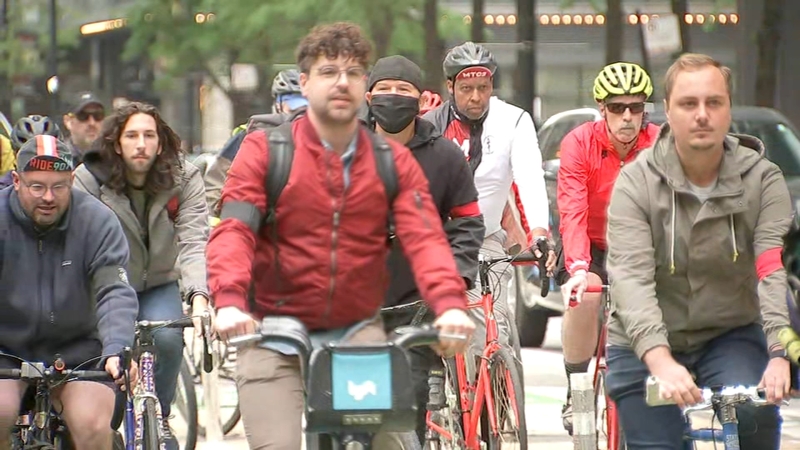 CHICAGO (WLS) -- Cycling activists have consistently decried the dangers of biking Chicago's streets. Despite hundreds of miles of dedicated bike-only lanes that wind through the city, cyclists say they're still left exposed.

In a single file formation, they set off in silence.

"We ride in silent memorial to these victims and their loved ones," said Elizabeth Adamczyk. "That silence is a universal language. It shows respect. It shows that we are not here to raise conflict- we are here to live our lives while trying to get around."

Despite hundreds of miles of dedicated bike-only lanes that wind through the city, cyclists say they're still left exposed.

"Any bike lane you go down for more than a couple blocks, you're going to see some sort of vehicle parked or stopped...the only way you can stop a car from doing that is specifically something that stops them from doing it," said cyclist Trevor Hess.

City data shows more than 1,600 cyclists were involved in crashes in 2021. At least three Chicago bicyclists have been killed so far in 2022.

At least Three Chicago bicyclists have been killed so far this year.

Police said a driver never stopped after running down Nick Parlingayan while he was riding his bike along the stretch of North Milwaukee near Kilbourn on May 4.

Paresh Chhatrala died after police said a young woman ran over the cyclist on a Saturday night in April, dragging Chhatrala's bike under her car as she tried to drive off.

And also in April, relatives of Gerardo Marciales laid a ghost bike near Balbo where he was killed while crossing DuSable Lake Shore Drive on his bike in February.

Ghost bikes all over the city are grim reminders of the dangers of what bicyclists said should be a sustainable and safe way to get around Chicago or any place.

"iI's a sign that there's a life here. Share the road, slow down," said CDOT safe ambassador Shameka Turner. "If everybody does their part and follows the rules of the road, we could all still be alive."