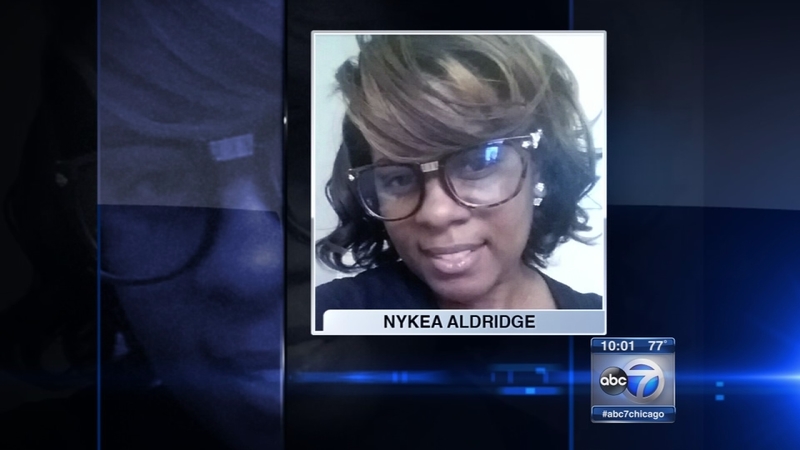 CHICAGO (WLS) -- Three people were being questioned in connection with the fatal shooting of Nykea Aldridge, a mother of four and cousin of Chicago Bulls star Dwyane Wade, police said Saturday.

Aldridge, 32, was pushing a stroller when she was hit by a stray bullet Friday afternoon in Chicago's Parkway Gardens neighborhood. Investigators said Aldridge was an innocent bystander and not the intended target.

Police said Aldridge had just left the Dulles School of Excellence around 3:30 p.m. in the 6300-block of South Calumet when two men approached another man in the vicinity and opened fire.

Aldridge -- who was walking home after enrolling her children in school -- was struck in the head and arm and taken to Stroger Hospital, where she was pronounced dead.

"I think it just brings home the fact that nobody is safe," said Fr. Michael Pfleger, of St. Sabina Church. "Everybody is vulnerable. Everybody's family is vulnerable. Chicago is a war zone."

Republican presidential nominee Donald Trump, who has been courting black voters, tweeted his condolences to Wade.

However, he first tweeted "Dwyane Wade's cousin was just shot and killed walking her baby in Chicago. Just what I have been saying. African-Americans will VOTE TRUMP!" In a first iteration of the tweet, Trump misspelled Wade's name.

Dwyane Wade's cousin was just shot and killed walking her baby in Chicago. Just what I have been saying. African-Americans will VOTE TRUMP!

Wade's mother, Pastor Jolinda Wade, said it's hard to believe that just one day after participating in an ESPN gun violence panel, their family would be touched by violence.

But in the wake of her personal loss, she remained determined. Saturday morning, Pastor Wade's New Creations Church in the West Pullman neighborhood held its regularly scheduled women's prayer breakfast.