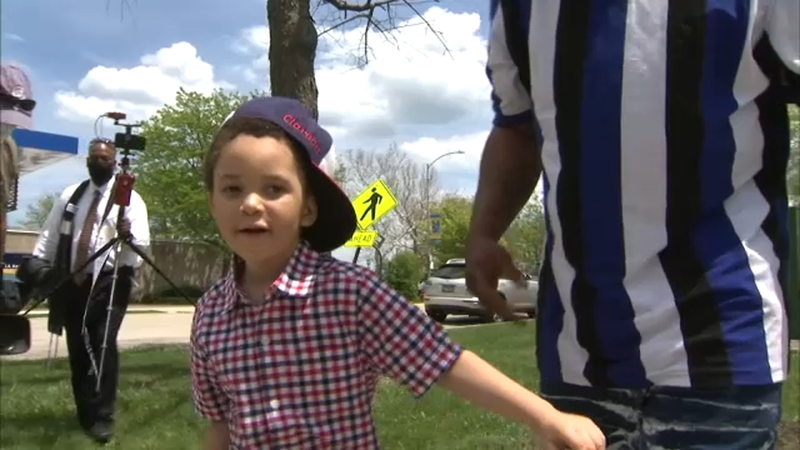 CHICAGO (WLS) -- The mother of a 6-year-old boy who was shot in the head last year is calling for an end to gun violence in the city.

Clareon Williams was 5-years-old when he was hit by a stray bullet last November while playing inside his South Side home.

Chicago police said a 5-year-old boy was struck and critically injured by a bullet Monday evening in the city's Roseland neighborhood.

That shooter is still on the loose, according to Chicago police.

As the boy continues to recovery, his family is making a plea for peace to protect other children from harm.

You can see the family photos and you hear to the number of shooting rise, but none of it matches the magnitude of the personal cost of gun violence.

That cost was evident as you see a boy on the road to recovery and a family forever changed.

Take it from Gwendolyn Dunmars, the mother of that boy shot in his head.

"Clareon is a miracle and prayer works," Dunmars said. "I appreciate all the prayers that everybody was praying for Clareon. I appreciate every doctor that put their hands on Clareon."

Now 6-year-old Williams is slowly walking six months after he was shot in the head while playing inside his family's South Side home. Today, his family is smiling.

"He never wants to sit down. He has a little wheel chair, he stays in it, but he gets up out of the chair and runs," the boy's dad, Clarence Williams said.

Clareon has had three surgeries to help his skull heal. Dunmars said her son, initially robbed of his speech and ability to walk, is improving, but they're taking it one day at a time.

"Clareon didn't know who I was. He didn't remember me, he didn't talk to me. A lot of times it was just hard to even see him, watch him go through that," she said.

There have been more more than 100 kids shot in Chicago since the start of this year.

Surveillance video shows a gunman opening fire last year in the Roseland neighborhood, shooting nearly a dozen rounds which ended up hitting WIlliams while he was simply playing at home. The family said they haven't been back there since.

"Little Clareon is a miracle, but we need another miracle. That someone stands up for this family," said Rabbi Michael Ben Yosef, Chicago Activist Coalition for Justice.

Dunmars also has a message to those who pull the trigger in Chicago.