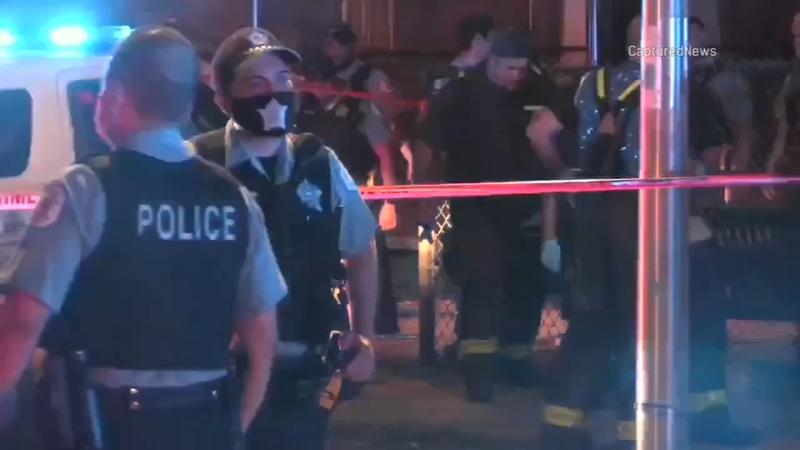 CHICAGO (WLS) -- The Chicago Police Department has confirmed that the son of a CPD sergeant was among those killed over a violent 4th of July weekend in the city.

Empty boxes of fireworks and sparklers litter the corner of 62nd and Carpenter streets in the Englewood neighborhood.

Just days ago, terror unfolded here as people and children ducked a hail of bullets when four people walked up and started shooting into a crowd gathered for the holiday.

Eight people were struck and four were killed, including a 14-year-old boy.

Tuesday morning, Chicago police revealed that the son of a police sergeant was among the dead.

"I don't want to go into too many details about it out of respect for the family but there's a sergeant, a Chicago Police Department sergeant whose son was killed on 62nd and Carpenter," said Chicago Police Chief of Operations Fred Waller.

RELATED: 1 charged with murder in shooting death of girl, 7, on West Side

Waller said the victim was in his 20s and was visiting relatives at the time of the shooting.

After a violent string of weekends marred by gun violence which has claimed the lives of several children, responding officers have been offered days off as they, too, deal with the toll the violence is taking.

"Yeah, you'd have to be inhuman to not have some effect on you when you see anyone killed is a tragedy but when there's children that are killed," Waller said. "It's an additional emotion that comes over many of the officers who have kids myself have kids, so it's just an additional emotion and we've provided EAP, and any type of outlet and outreach for the officers to have some type of way to express those feelings."

The city is dealing with yet another violent night where 19 people were shot and four were killed.

Three people were shot in a drive by on the West Side That left one man dead. The survivors refusing to cooperate with police.

CPD shining a light on electronic monitoring program which they say isn't working as they see offenders released with little to no consequences.