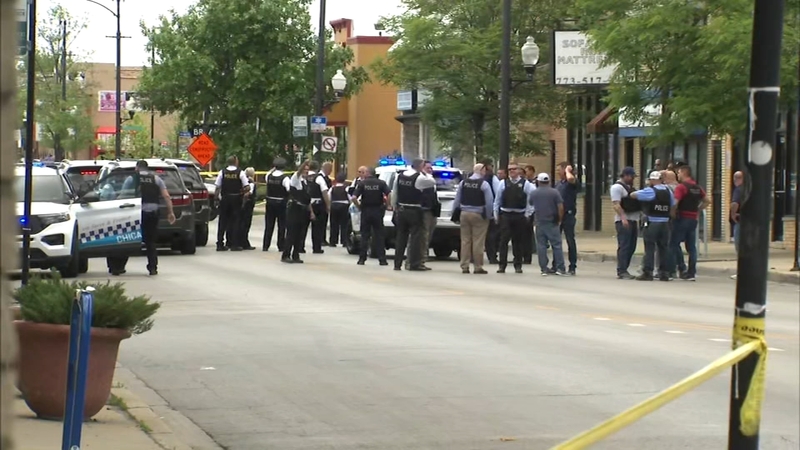 CHICAGO (WLS) -- A U.S. Marshal and a K-9 were wounded in a shootout involving Chicago police in the Belmont Cragin neighborhood on the Northwest Side Thursday, officials said.

When the officers announced themselves, police said at least one suspect opened fire on them in the 5200-block of W. Belmont Ave. around 1:23 p.m.

Chicago police investigate after a U.S. Marshal and a K-9 were injured in a shootout involving CPD in the Belmont Cragin neighborhood Thursday.

Police said a U.S. Marshal was shot in the hand and his K-9 dog was also struck in his upper body. A Chicago police officer returned fire, but did not strike anyone. Several neighbors said they heard the gunfire.

"I had my radio right next to me, and I was listening in," a neighbor named Mohammed said. "Next thing I know, I heard the fact that it was an officer shot. I thought, an officer shot? Just last night, a police officer in Englewood got shot. At first I wasn't surprised, but then it was added on that a K-9 was also shot."

The K-9 was rushed to MedVet, a 24-hour emergency veterinary hospital, where it may need to have surgery. No information has been provided on the dog's condition.

Chicago fire officials said an ambulance was called to the veterinary clinic for the U.S. Marshal, who was shot in the hand. He was treated there in the 3300-block of N. California and is expected to be OK.

Two suspects were taken into custody, Chicago police said. An investigation into the incident is underway.