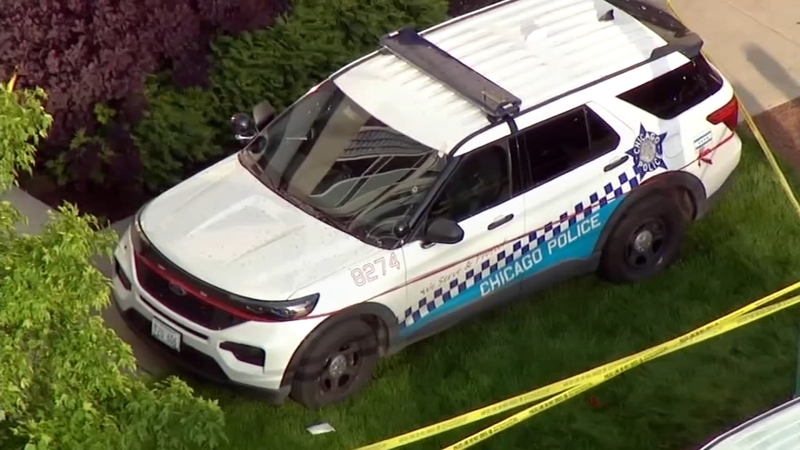 Police sources told ABC7 that investigators are now looking for a 28-year-old man with a history of gun crimes that they believe shot the officer.

CPD Supt. David Brown said at about 5:42 p.m. two officers - who were in-uniform and driving a marked squad car - attempted a traffic stop near 61st and Paulina streets. The car they were attempting to stop at first sped off, then came back around and slowed down so they could pull up parallel to the officers' car and opened fire, striking the female officer, who was the driver of the squad car.

"As they attempt the traffic stop, the offenders speed off and they slow down becoming parallel with the officers and begin firing a gun at them," Brown said.

"They never completed the traffic stop. They saw the offenders do something at 61st Street and they were following them," said Ald. Ray Lopez (15th), who represents the ward where the shooting occurred and where the wounded officer's family lives.

The shot officer's partner jumped into the driver's seat and rushed her to University of Chicago Hospital, Brown said, where she was last listed in serious but stable condition.

The injured officer's partner was also checked out at Northwestern and then released, with officials saying he was not injured in any way. Dozens of his fellow officers were there as he walked out Wednesday night.

They stood in silence, saluting him, before he could be seen raising his hand, as if to signal he's OK. His brothers and sisters in blue then burst into applause.

The car carrying the shooter then fled and crashed near 64th and South Bishop streets, and the people inside fled on foot in different directions.

Brown said police found car keys and a gun "in the immediate area" where the suspect fled after crashing the car.

Some West Englewood residents said they're fed up with the violence in their neighborhood as CPD searched for the suspects who shot a police officer Wednesday evening.

The suspected gunman lives less than two miles from the shooting, according to the alert. The Sun-Times is not naming him because he has not been charged.

Court records show he was arrested in October of 2020 after he was spotted speeding and running red lights on the South Side. Arresting officers found a Smith and Wesson handgun under the driver's side floor mat.

Lopez characterized the shooting as an "assassination attempt."

"Having anyone drive up alongside an officer ... this was basically an assassination attempt. There's nothing unintentional about what happened," he said.

"This was a straight up attempted execution," he said. "There's no other way to describe it."

Thursday, Catanzara arranged a Zoom call between the injured officer and Officer Yanez.

"Carlos, just being the amazing human being that he is, wanted to show support that he knows is experiencing a lot of the mortality fears that he faced and still faces today," he said. "They had a nice heart to heart. I think it's probably a situation that only the two of them can understand. We can sit here and talk all we want about the dangers of this job but there isn't too many officers who have been shot in the head and survived."

Sally Hazelgrove was steps away inside of Beautiful Zion M.B. Church with other kids, where she runs a program for at-risk boys in Englewood when the shooting occurred.

"It's a war zone, for sure," she said. "And so, unfortunately, you're not shocked. You feel scared, right? Because you're just not sure what effect that's going to have on the neighborhood."

"People done lost hope in the community," added Dazell Green, senior deacon at Beautiful Zion M.B. Church. "The guns, they badder than you. All you have to do is pull the trigger, and they don't care who they hit."

This shooting happened less than a mile from where Officer Ella French was shot and killed and her partner Officer Carlos Yanez Jr. was critically wounded 10 months ago. Some in the community are fed up.

"I'm very concerned about the children here in Englewood and the police officers getting shot and killed. It's just so sad," said Pastor James Cobb, with Jesus Christ of Greater Faith.

"That's not a smart way to live a life. You need find God. You need to find a job because the life you're living ain't nothing but death, Green said. "They fighting a war that nobody's going to win."
One of the injured officer's friends said she became a cop because she wanted to help her city.

Chicago police said 22 officers have been shot at so far this year, and four have been hit.