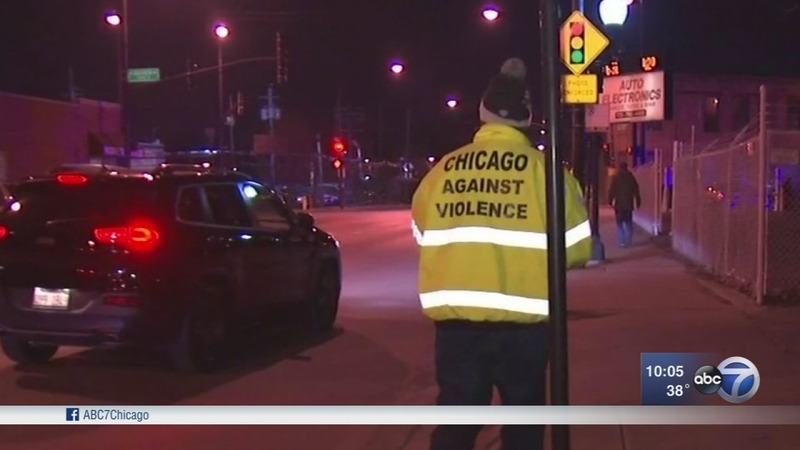 Community fed up as violence continues to rise

CHICAGO (WLS) -- 11 people were killed and 11 wounded in shootings over a 48-hour period in Chicago from Tuesday afternoon to Thursday morning, Chicago police said.

The highest-profile of those shootings was the triple shooting that killed a 2-year-old boy and his uncle, and which was streamed live on Facebook. More reward money will be announced in that shooting in the morning, but Thursday night near the site of that violence there was a call to action.

"We have to get out of our houses and into our communities. These kids depend on us!" said Aleta Clark, community activist.

There was raw emotion, frustration, hand-to-hand prayer and action after three children including 2-year-old Lavontay White were killed by gunfire.

Police held an Operation Wake Up in North Lawndale, where people step forward, sign up to partner with police and speak out.

"We need to step up to the plate and be leaders," said Sherrone Palmer, resident.

"We're not running away from it. We want our community back. I grew up in this community," said Nicole Ford, resident.

11 people have been killed and 11 wounded in shootings over a 48-hour period in Chicago from Tuesday afternoon to Thursday morning, Chicago police said.

As the mayor welcomed Chicago's newest police recruit class, he alluded to this week's violence that has taken the lives of at least three young children in separate incidents.

Then during his news conference, the mayor was asked about Trump calling Chicago "two cities."

"There's one Chicago that's incredible, luxurious, safe. Then there's another Chicago that's worse than almost any of the places that we talk about every night on newscasts," Trump said.

Emanuel would not comment on Trump's latest comparison of Chicago to war zones, adding that during his visit to the White House earlier this week he asked for more federal agents to help Chicago cops.

"I would enjoy the complement of FBI, DEA and ATF agents to work alongside them," Emanuel said.

"What I evaluate is the content of the presidency, not the press conference," Emanuel said. "He ran on certain things, and I don't see those things happening.

"Where are we in advancing, 'making America great again'?" Emanuel continued. 'And right now, I would say this is not a strong start to the presidency."

Will Jones spoke with members of the street intervention team for BUILD, a non-profit working to stop violence in Chicago's toughest neighborhoods.

On Tuesday, a 30-year-old man was shot and killed in the North Lawndale neighborhood, police said. He was a passenger in a vehicle when another vehicle approached and someone inside fired shots at about 9:30 a.m.

Police said Collins, a documented gang member who was recently released from prison, was the intended target.

Later Tuesday, a 62-year-old man was shot in the 3400-block of West Walnut Street in the East Garfield Park neighborhood at 2:40 p.m. He was transported to Stroger Hospital where he was pronounced dead, police said.

On Wednesday, a 25-year-old man was shot and killed while driving in the 2300-block of North Lake Shore Drive at about 3:45 a.m. The man was driving southbound when another vehicle pulled alongside and someone inside fired shots.

The vehicle crashed into the center median. Two other people inside the vehicle were not car.

In the South Shore neighborhood, a 26-year-old man entered a store in the 2000-block of East 71st Street when someone entered and shot the victim at about 11:56 a.m., Wednesday, police said.
In the Brighton Park neighborhood, three men were killed and two others wounded in a shooting at 5:36 p.m., police said. The three killed have been identified to the Cook County Medical Examiner's Office as Filogonio Rivera-Camacho, 20, and Emmanuel Camacho, 18, and Julian Miller, 19.
Two other people were wounded in the shooting. No one is in custody.

Later in the Marquette Park neighborhood, one man was shot and killed in the 3000-block of West Marquette Road at about 8:43 p.m. The victim was standing in an alley when a person in a black sedan fired shots.

On Thursday, a 24-year-old man was killed in the Avondale neighborhood at about 5:41 a.m. Police found the man with a gunshot wound to the chest in the 4000-block of West Melrose Avenue and pronounced dead at the scene.

The victims do not include two girls, 11-year-old Takiya Holmes and 12-year-old Kanari Gentry-Bowers, who were each shot over the weekend and died this week.