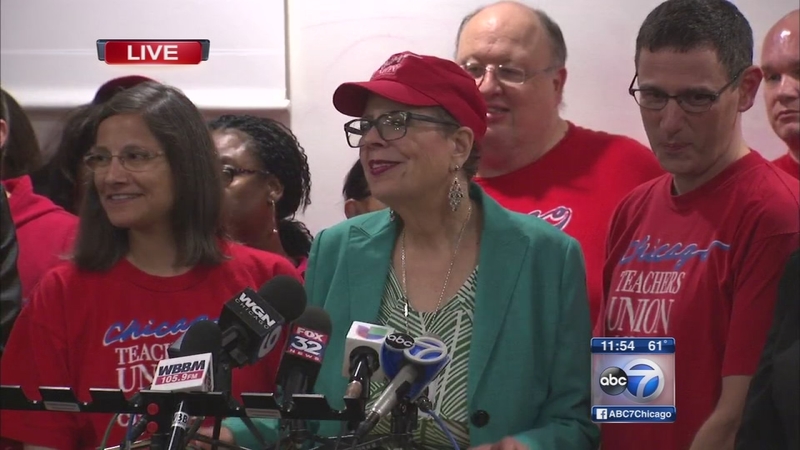 CHICAGO (WLS) -- After days of negotiation between teachers and Chicago Public Schools, a tentative agreement was reached on Monday and students will have a normal school day on Tuesday.

"It wasn't easy, as you all know, clearly we had some issues and there are some things we are still going to be working on," said Chicago Teacher Union President Karen Lewis.

Lewis said she was relieved as she described some of the tentative contract's highlights at a midnight press conference.

"We have a commitment from the Board of Education on K through 2 class sizes, the layoff and recall position, our pension pick up, and a host of other things that will make the classrooms work a lot better," Lewis said.

"Parents and tax payers will be relieved and reassured," Emanuel said.

Frank Clark of Chicago Board of Education also thanked the CTU.

"Hundreds of thousands of Chicago Public School students are going to be exactly where they're supposed to be, in school," said Clark.

The bargaining unit for the Chicago Teachers Union spent the entire long weekend negotiating with CPS officials. CTU demanded no cuts to teachers' pay and benefits, better staffing and more spending per student. CPS offered teachers a raise, but wanted them to contribute more to their own pension.

CTU VP Jesse Sharkey addresses Big Bargaining Team as we are down to the wire in negotiations with the Board of Ed. #faircontractnow pic.twitter.com/RNTLtmQxhC

CTU teachers prepared for the possibility of the strike by picking up picket signs ahead of the planned strike on Monday.

"I want to be in the classroom teaching, that is the whole goal, the fact that we have to fight like this just for a fair wage seems ridiculous," said high school teacher Nate Gavzer.

CTU said the city must come up with revenue, something a group called Parents 4 Teachers demanded as they rallied in Chicago Mayor Rahm Emanuel's North Side neighborhood Monday morning. The group went door-to-door handing out postcards asking for support for CPS teachers.