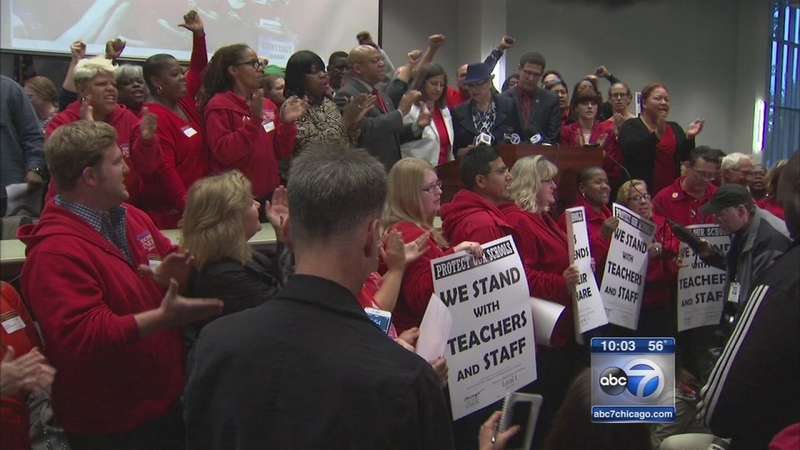 CHICAGO (WLS) -- The Chicago Teachers Union leaders set a strike date of October 11 if an agreement on teachers' contracts cannot be reached. Members voted last week in favor of a strike.

The union is required to provide Chicago Public Schools with 10 day notice.

At a press conference Wednesday evening Lewis said the union remains engaged in negotiations with CPS over the contract and that if an agreement is reached before Oct. 11 the strike would be averted. Both sides will sit down again Thursday.

"We negotiated yesterday, today, and we're negotiating tomorrow. We're going to continue to try and reach an agreement on this contract," CTU president Karen Lewis said.

"We're asking for some simple assurances that the public schools themselves will be defended against further cuts," said union vice president Jesse Sharkey.

CPS released a statement following the union's announcement, saying in part, "What we can all agree on is that teachers deserve a raise, which is why we offered a contract with a healthy raise that was approved by an independent arbitrator. We believe a strike can be averted and to make sure children's academic progress isn't interrupted, CPS will work tirelessly at the bargaining table."

While contract negotiations continue, CPS is holding out hope the union will accept an offer that Lewis called a serious one before her bargaining team rejected it last year. The deal included a raise, but required teachers to contribute more toward their own pension fund. The union views it as a pay cut, but CPS officials insist it is a fair offer.

"If the funding for the schools from Rahm Emanuel's TIF fund went to fund public education, we could solve this," Lewis said.

At their meeting, the Chicago School Board passed a contingency plan in case of a teachers' strike. They voted to set aside $15 million, which is less money than was set aside in 2012.

Parents and students are concerned.

"I think I'll be fine because it will give me more time to write essays for college. But just studying for the exam without a teacher to prepare us for it, that will just hinder a little bit," said Justin Elue, a senior in high school

Earlier in the day Lewis quietly snuck into the monthly Chicago School Board meeting Wednesday, the first time she has attended a school board meeting since the school district moved into its new offices downtown two years ago.

"I just wanted to say hello because I have not met most of you, and just to let you know I hope we can open up lines of communication because clearly we do have problems we would like settled," she told the board members.

Those problems include a contract for teachers, who have been without one for a year and a half. It's no coincidence Lewis made her rare school board appearance on the same day the union plans to announce whether or not it plans to strike.

"I'm hoping that you'll find some money to fund a contract because you can find money to do other things, so let's see if we can find some of that TIF money," Lewis told board members.