As millions hit the road for Memorial Day 2022, here are best, worst times to travel 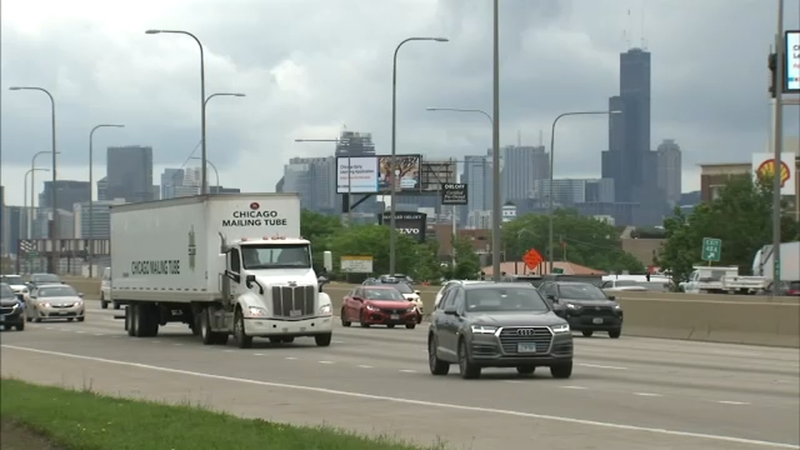 CHICAGO (WLS) -- Despite record gas prices, AAA predicts more Illinoisans will travel for Memorial Day than have in the past three years, and it all started Thursday morning.

A lot of people tried to get a jump on holiday traffic, with so many leaving early.

According to a transportation data service called Inrix, the worst corridor and worst time to travel in Chicago is along Interstate 290 near Racine Avenue from 3:30 to 5:30 p.m. Thursday, where it's 131% over normal traffic.

AAA said it expects nearly 1.9 million Illinoisans to travel 50 miles or more from home this weekend, marking the busiest unofficial start of summer in three years.

"Yeah going up to the lake gonna have a good time celebrate the weekend it's gonna be fun," said Quinton Carpenter, who is driving to a lake in Wisconsin.

That's a popular trend today as many head out of town early and cross state lines to Wisconsin for their destination.

Most will be traveling by car amid record-high gas prices.

"We decided to go today rather than tomorrow because of the traffic and I'm sure there will be plenty of cars today," said Kay Poyner Brown.

Get the current traffic updates from ABC7 Chicago

"If you're heading out of town this weekend, make sure to shop around, especially if you're gonna be crossing a state line," GasBuddy's Patrick De Haan said. "Illinois is the most expensive state in the Great Lakes, so, if you're heading north, east, south or west, your better option is to wait until you head out of the state to fill your tank. As we approach and get into summer, I am not expecting much relief at all. In fact, gas prices are likely to remain high for a majority of the summer. We may see a little dose of relief here and there, but, overall, the most painful summer we've ever seen."

Thomas Long said his family is coming to Chicago from Kansas for the holiday weekend and will have to pay those prices.

But 1.4 million passengers are also expected to pass through O'Hare and Midway airports Thursday through next Tuesday.

At O'Hare, they're expecting a 47% increase in passenger traffic, compared to last Memorial Day.

Transportation experts have said if you're going somewhere by car, the best time was to leave was before 7 a.m. Thursday. The bottom line: Don't wait until the afternoon.

Dorothy Smith has no plans on leaving for Lafayette, Indiana in that kind of traffic.

"No way in the world we would have left today ... because it's gonna be jammed," she said.

Lifeguards were getting ready, and deliveries were being made to the boathouse at North Avenue Beach Thursday for those getting ready to unwind during a staycation this holiday weekend.

For those looking to save and stay close to home, Chicago's beaches officially open Friday.

Lifeguards are still wanted as beaches deal with staffing shortages, but the Chicago Park District said it's still prepared for swimmers this weekend.

On Thursday morning, party spot Castaways was stocking up and looking for more staff to welcome the crowds.

"So ordering product, trying to staff up, reaching out to friends, neighbors and relatives, whoever we can to try and come onboard, help us out this weekend," Castaways General Manager Gino Mori said. "So if anybody is looking for work, part-time work or full-time work, we're here."

Lifeguards are also wanted, due to a nationwide shortage.

And while the Chicago Park District is still recruiting, they said they will be ready for swimmers.