Chicago twins step into manhood, talk about overcoming obstacles of growing up on West Side 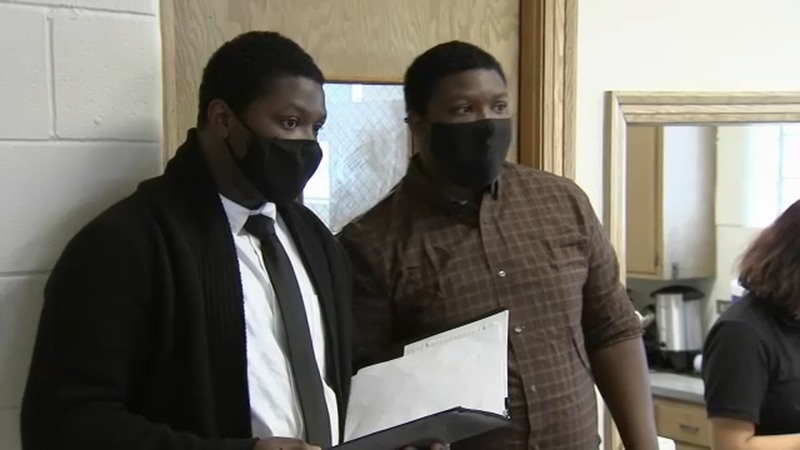 CHICAGO (WLS) -- A surprise birthday party for twin brothers, Floyd and Lloyd Russell, helps them mark a special milestone as they turn 18.

For the past five years, ABC7 Chicago Reporter Stacey Baca has chronicled their lives as they grow up on Chicago's West Side since they were just 13-years-old.

Over the years, their grandmother died, they moved four times, a bullet pierced one of their homes and they've changed from public to a private school.

On a recent December morning, the pair were at their private high school, Cornerstone Academy in Oak Park, practicing their Christmas holiday performance.

Now, as they venture into this next phase of their lives, they discuss reaching manhood, and what it means to both of them.

"When I hear the word 18, it means becoming a man," said Floyd. "I thank God for people I'm around who always push me forward."

For Lloyd, it's a milestone that also signifies independence.

When Baca first met the twins, they lived in North Lawndale, one of the city's most violent neighborhoods. They have moved four times and now live in the Garfield Park area, according to their mother, Lisa Russell.

They're 13-year-old twins growing up in one of Chicago's most violent neighborhoods.

Over the years, Lisa has been a constant force in their lives, continually pushing them to join programs, work and stay on track.

Today, they are looking forward to high school graduation and college. When you ask who is at the top of their list to thank, Lloyd mentions one person.

Lisa admits it hasn't been an easy road.

Five years ago, the Chicago mother was worried about keeping gangs away from her sons. She also forced them to drop friends she didn't see as positive influences.

When a bullet struck her home, she knew it was time to move, fearing her sons would be the ones shot.

To this day, she admits they could still revolt, quit school and make different decisions.

Lloyd knows that's how his mom operates and thinks.

Their mom isn't the only force in their lives. Their older brother, sister, brother-in-law and pastor from Harmony Community Church - Chicago, also play critical roles.

"When you have connections to a lot of males in your life, they help you a lot," Floyd said. "No offense to the women in my life, they play a part as well."

Lisa said she understands that her sons need that male-to-male connection.

"I can't be the mother and the father. It's enough being the mother - that's full-time," she said.

Their mom has encouraged them to join programs like "I Am A Gentleman." They are even part of the organization's recent public service announcement to encourage other teens their age to get vaccinated.

The twins have learned lessons from the program's life coaches, including Doug Eisenhauer of Downers Grove.

"They have such a gravitas about them," Eisenhauer said. "They're just bright, intellectual young men who, I'm hoping, if anything I say or imparted some wisdom on them that makes them grow up and be better men."

The twins' dad died of an illness before we met the boys. Throughout the years, they have talked about their father, losing him and the hole it left in their hearts. Now, however, they are using that experience to help other young men in "I Am A Gentleman."

"There's a lot of people in "I Am A Gentleman" who lost their dad that don't know how to deal with it. Floyd and I try to help them because we went through it. We got over it," Lloyd said.

There have been challenges, but Floyd and Lloyd want other teens to know, 'If we can do it, so can you!'

Along with attending programs, the twins have worked various jobs, keeping their reality real.

"They worked at the funeral home this summer. They got a chance to people their age, even people they grew up with, they were fixing their bodies and coming home saying, 'Mom, did you know this person?'" Lisa said.

For now, Lloyd and Floyd move forward, realizing they've made it to manhood and choosing their direction.

"It does take a village to raise us, but we're also part of that village helping raise ourselves," Floyd said.

Their future and what happens next is now up to both of them.

"The only thing we look forward to is June 3rd," Lloyd said. "June 3, we'll be graduating and looking forward to college."