President Trump sending 'hundreds' of federal agents to Chicago as part of anti-violence effort; Mayor Lightfoot says focus will not be protesters 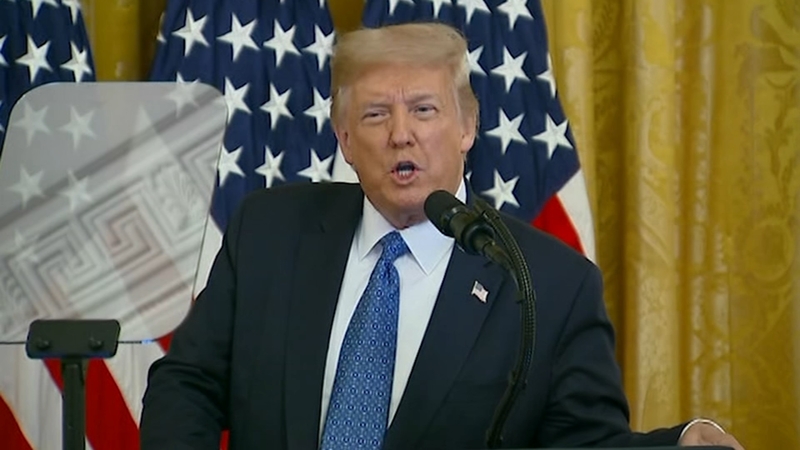 There will be hundreds of federal agents sent to Chicago to fight crime, a day after 15 were shot outside a funeral home.

Trump spent much of his "help is on the way" announcement Wednesday zeroing in on Chicago crime statistics, rattling off death tolls and killing records set and broken.

The new "law and order" initiative from the Trump administration includes sending "hundreds" of federal agents to Chicago.

Although not calling out any Chicago leaders by name, he blamed deadly policies and deadly politicians as responsible for out-of-control crime in numerous U.S. cities.

"Perhaps no citizens have suffered more from the menace of violent crime than the wonderful people of Chicago, a city I know very well. At least 414 people have been murdered in the city this year. A roughly 50% increase over last year," Trump said.

And with that, he said a surge of hundreds of federal officers from the FBI and other agencies will descend on Chicago, as he said, to end the bloodshed.

As the I-Team reported two days ago, this is the same thing the Department of Justice is doing in Kansas City, after a 4-year-old boy was murdered there. The program is known as Operation Legend.

Trump's announcement came less than 24 hours after 15 people were shot and wounded during a funeral firefight on the South Side.

At least 60 gunshots could be heard on security video of the scene, police said.

"This rampage of violence shocks the conscience of our nation, we will not stand by and watch it happen, can't do that, the citizens of Chicago are citizens of America and they have the same right as every other American to live in safety, dignity and peace. No mother should have to cradle a dead child in her arms," Trump said.

Gov. JB Pritzker said he spoke with the head of the FBI in Chicago Wednesday.

"I welcome legitimate resources from the federal government to reduce violence and help our residents stay safe," Pritzker said. "But it's this other thing that's going on where people are wearing camouflage uniforms, with no identification about who they are, claiming to be protecting federal buildings, when in fact they're going blocks and blocks away from federal buildings to do things like throw people into vans and arrest them without telling them why they're being arrested, and then keeping them for hours before letting go. That is not something that is acceptable in the state of Illinois."

Mayor Lori Lightfoot said she got assurances from the federal government that agents would be focused on efforts to help the city with its pressing need to deal with gun violence, not with protesters.

But she also weighed in on the president's plan and his pointed announcement after a City Council meeting Wednesday, saying "there are too many damn guns on our streets," and gun control should be the focus.

Mayor Lori Lightfoot hit back after President Donald Trump once again railed about Chicago violence at a Wednesday afternoon press conference, saying the president uses it as a "distraction" from criticism over his administration's response to the COVID-19.

Lightfoot's office said the president reached out to her by phone Wednesday afternoon, saying in a statement, "The President reached out to Mayor Lightfoot this evening to confirm that he plans to send federal resources to Chicago to supplement ongoing federal investigations pertaining to violent crime. The conversation was brief and straightforward. Mayor Lightfoot maintains that all resources will be investigatory in nature and be coordinated through the U.S. Attorney's office. The Mayor has made clear that if there is any deviation from what has been announced, we will pursue all available legal options to protect Chicagoans."

The U.S. Attorney from Chicago John Lausch was at the White House for the announcement and said the surge of federal agents will "increase prosecutions of trigger-pullers, drug traffickers, carjackers and those who illegally traffic, use and possess firearms."

The other city immediately getting help is Albuquerque, New Mexico, where murders are at a record pace.

After responding with a four-page letter to the president Monday, Lightfoot softened her tone a bit, appearing cautiously ready to welcome the agents after getting clarification on their role.

The mayor, however, said she and other leaders remain concerned enough that they are ready to take action if things change.

Mayor Lori Lightfoot speaks about federal resources coming to Chicago amid concerns about actions against protesters in Portland, Oregon.

Images from Portland, Oregon, of federal agents engaged in confrontations with protesters, arresting people and whisking them away in unmarked vans, has a number of elected officials across Illinois deeply concerned and ready to fight Trump administration plans.

But with word the agents coming to Chicago will be working under the direction of Lausch, and in conjunction with the FBI and DEA, Lightfoot seemed more welcoming of the help.

Mayor Lightfoot said she's been told the federal agents coming to Chicago will work with local authorities on anti-violence, not target peaceful protests as in Portland, Ore.

"Unlike what happened in Portland, what we will receive is resources that are going to plug in to the existing federal agencies that we work with on a regular basis to help manage and suppress violent crime in our city," Lightfoot said.

Of particular concern are illegal guns, and the toll that shootings and murders are taking on communities and families. CPD Supt. David Brown said he welcomed the additional federal help.

"Additional resources will enhance our ability to hold our criminals accountable for their behavior," he said.

Federal agents already work side-by-side with Chicago police on gun, drug and mass shooting cases, and dangerous fugitive missions. ATF, FBI DEA, US Marshals and Homeland Security all have agents that coordinate with CPD in various ways including serving together on special cooperative teams such as the Chicago Crime Gun Strike Force started in 2017.
Lightfoot now says that federal footprint will be expanded.

"The problem would come if the federal agents were to come into Chicago over the objection of local and state authorities to do run of the mill, garden variety street patrols or maintain the public order, that's where you'd run into some Constitutional issues," Soffer said.

Although Justice Department officials have told the I-Team they will model a beefed-up effort in Chicago on what they did this month in Kansas City, other sources say a closer prototype for the upcoming federal action may be the surge of officers, prosecutors and resources that occurred starting in the late 1990's, when Chicago felons with guns were targeted federally with longer prison sentences.

Pritzker expressed frustration about difficulty trying to get answers about the agents from the Trump administration.

"I have put a call in to the Acting Secretary of Homeland Security. He's refused to call me back, telling us he couldn't possibly get back to me until about 48 hours from now," Pritzker said. "That's ridiculous."

The Acting Secretary of Homeland Security said Tuesday night that the Federal Protective Service and Customs and Border Protection agents deployed to Portland are there to guard federal property that's been targeted for weeks by "anarchists." He said the situation there is different than in cities like Chicago.

"Portland is unique. There's no other city like it right now that we see this violence at federal courthouses. We have no other teams like has been described here in any other city. It's just Portland," Acting Sec. Chad Wolf said.

Protests over the killing of George Floyd have taken place in downtown Portland for more than 50 consecutive days, drawing at times more than 10,000 mostly peaceful demonstrators. A relatively small number of activists have vandalized downtown buildings, including the federal courthouse, and attacked police and federal agents.

There remains a sense of deep distrust by the mayor and others that role of the agents could change.

"Don't even think about trying what you did in Portland in Chicago," said U.S. Rep. Chuy Garcia, D-Chicago. "Not here, not ever, not on our watch."

Attorney General Kwame Raoul released a statement, saying in part, "I remain deeply concerned by reports of the deployment of federal agents in Portland and by the president's threats to send federal agents to Chicago. I am committed to using every resource available to my office to prevent actions that would lead to the violation of the constitutional rights of residents of Chicago and Illinois."

This wouldn't be the first time Trump has sent additional federal law enforcement resources to Chicago after a spike in violent crime. He also did it in 2017, adding a few dozen agents to investigate illegal gun sales.