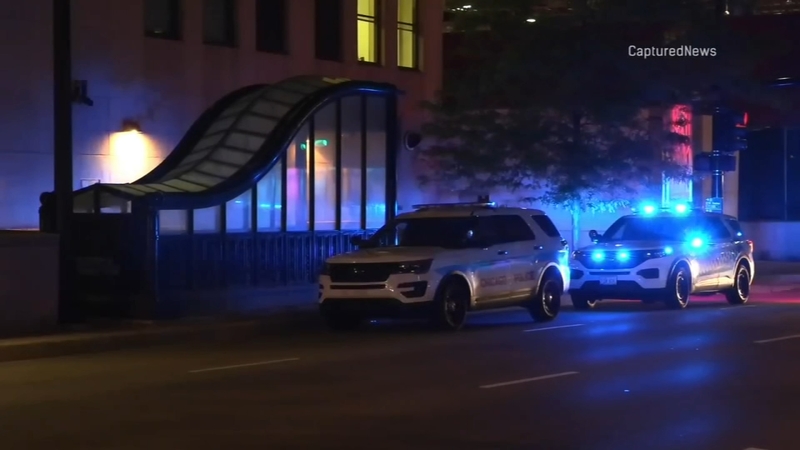 CHICAGO (WLS) -- A passenger was stabbed Monday night on a CTA Blue Line train, and he has died, Chicago police said.

CPD said that victim came stumbling out of a train car at the Blue Line stop at LaSalle Street and Ida B. Wells Drive along the border of the Loop and the South Loop sometime after 10:30 p.m.

The victim got in the third car on a northbound CTA Blue Line train at the Clinton stop.

The stabbing occurred somewhere between there and the LaSalle stop, where the victim was found with a stab wound to the chest.

He was transported to Stroger Hospital where he died. The Cook County Medical Examiner identified him as Nick Osthimer.

Chicago police said they don't have a motive for what may have led to the stabbing.

CTA-related crime is up 40% this year compared to last.

"It's concerning because, you know, I don't know if I'm going to be robbed one day or not or mugged or even killed or shot; I mean, you see at Millennium Park someone got shot in broad daylight, so I mean it's happening all the time everywhere now," commuter Ryan Esquivel said. "You are not safe in this city anymore."

In March, CTA officials said they would add more security on trains and buses, but they have yet to be fully deployed.

"Of course it worries me. When I take the CTA I try to be in the front car. It's an urban legend that it's the safest one, and I try to be with people," commuter Dubi Kaufmann said. "If I can, I avoid taking the CTA at night."

"A little bit -- I have seen more people in the vests; they have been patrolling a little more kind of visibly on the trains," commuter David Zikorski said.

There is no one in custody, and Area Three detectives are investigating.

CTA said there were some service delays during the incident, but service has since resumed.

We want to assure all CTA riders and employees that your safety and security is the number one priority for both CTA and the Chicago Police Department (CPD). That's why we have added new resources to address crime, and continually look for ways to expand and improve our efforts to collaborate with CPD regarding the strategic deployment of resources.

The CTA supplements CPD's deployment of uniformed officers with the use of unarmed guards who serve as an added layer of eyes and ears our on our system who are trained to monitor and report suspicious activity and incidents when they do occur. Further, CTA's comprehensive network of more than 33,000 security cameras has been a vital asset in quickly untangling the details of complex situations, allowing officers to quickly identify and track down those responsible for crimes committed on and near our properties.

Our efforts in partnership with CPD to reduce crime are CTA's top focus, and we won't waiver on this commitment.