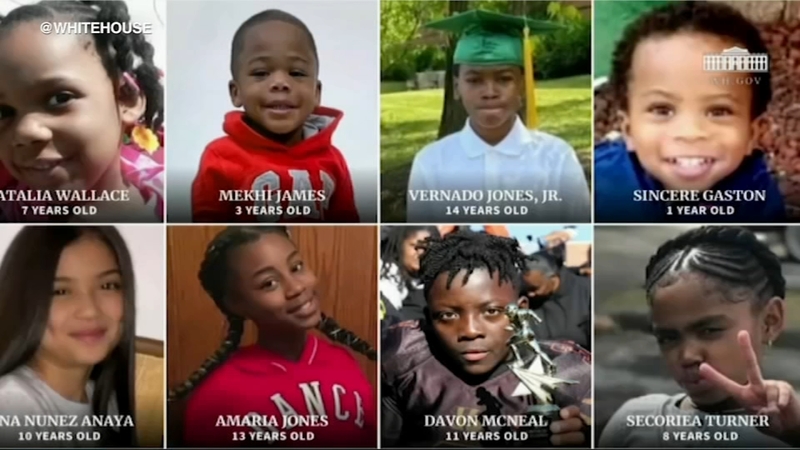 WASHINGTON (WLS) -- President Donald Trump has called out Chicago's issue with gun violence many times, and at the end of the White House briefing Thursday, Press Secretary Kayleigh McEnany turned her attention to recent violence against children, especially in Chicago.

"As we head into the weekend, I just wanted to make a plea for peace in our streets because far too many children have been lost," McEnany said. "It's important to know their names; it's important to see their faces."

Eight photos of children were shown. Of those, six were killed in Chicago.

Wallace was killed after being struck by a stray bullet at a family 4th of July party in South Austin.

Chicago police said a 22-year-old woman was driving home from the laundromat with her child when another vehicle pulled up and someone inside fired at least seven shots. James, who was sitting in a carseat in the back of the vehicle, was struck in the chest, police said. The mother suffered a graze wound to the head.

Vernado Jones Jr. was shot and killed in the 6100-block of South Carpenters Street while watching what his mom said was a fireworks show for kids. He was struck in the back after police said four men walked up to the park and opened fire. Three other people were also killed.

Amaria Jones was hit by a stray bullet that pierced the window of her home in the South Austin neighborhood while she was showing her mom a dance move.