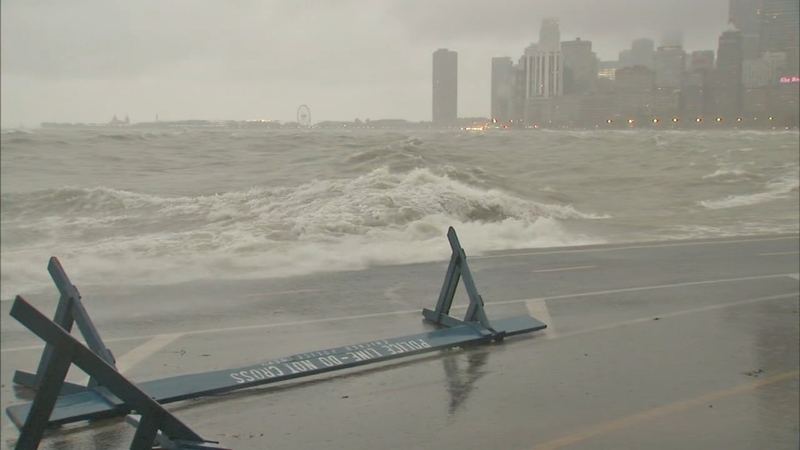 CHICAGO (WLS) -- Nearly 20,000 people were without power Monday as storms whipped up strong winds and dumped more than two inches of rain in Chicago, which has seen a relatively dry season so far.

The brunt of the storms hit mid-morning with peak gusts of 45 mph at O'Hare International Airport and 48 mph Midway, according to the National Weather Service. More than 2 inches of rain fell in Chicago while some west and southwest suburbs reported over 3 and 4 inches.

Electricity had been restored to 81% of them by noon Monday. Outages in Chicago peaked earlier with 33,000 people without power.

Get the latest AccuWeather updates

ABC7 Chicago Meteorologist Tracy Butler issued an AccuWeather Alert for Sunday evening into Monday morning due to possible conditions.
The rain began Sunday morning and continued through the evening, with the higher totals coming in from the southern suburbs, especially areas closer to Interstate 80.

The rain is expected to diminish Monday morning and afternoon, but strong winds will remain, particularly in areas along the lakefront. The winds could lead to waves of up to 12-16 feet in Lake Michigan.

The high waves have led the Chicago Park District to close parts of the Lakefront Trail Monday morning.

#ChiLFTAlert 🚨: Please be advised, the pedestrian trail from Fullerton to North Ave., 47th to 51st St. & both trails from North Ave. to Ohio St. are closed due to high waves. Access to the underpasses at Oak St., Chicago Ave. & Division St. is blocked, until further notice. pic.twitter.com/H2Yq7T91B8

In north suburban Evanston, a large tree came down on Judson Avenue, hitting at least one car and a light pole.

A number of watches and warnings have been issued: