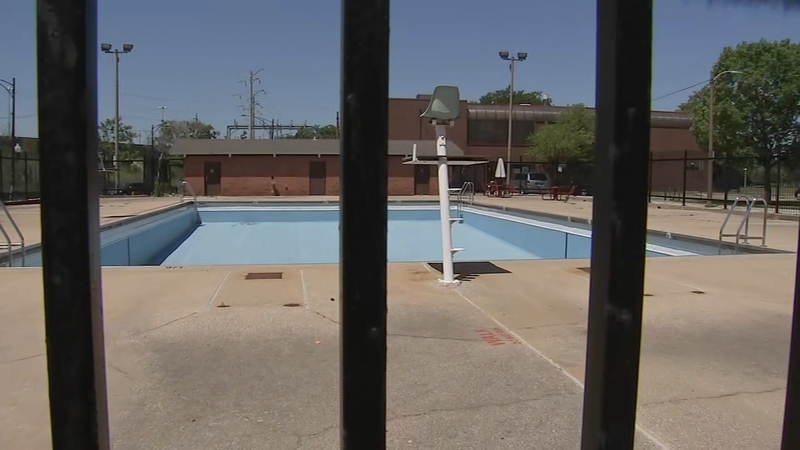 CHICAGO (WLS) -- The Chicago Park District has pushed back the opening of 49 outdoor neighborhood pools amid a shortage of lifeguards.

The park district was supposed to open the city's outdoor pools on June 24, but that has been delayed until July 5. The outdoor neighborhood pools will be empty until then.

Jazmin Patino, 20, from the Back of the Yards neighborhood was hoping to be able to cool off with her siblings in her neighborhood park district pool, but it will remain dry until July 5.

"It just means that we're not going to have a pleasant summer like we usually do, just to be able to cool down in these pools," Patino said.

There are 77 park district pools in the city, and, as the temperatures rise, they become essential. But lifeguards are scarce.

The park district said its first priority is to staff the beaches in the midst of a nationwide lifeguard shortage, which means the pools can't open yet.

"We need the coverage at the lakefront because the lakefront is so dangerous and our No. 1 priority, and we are not going to negotiate on this, is the life-saving component," Chicago Park District Superintendent Rosa Escareno said. "I'm just not satisfied. We don't have enough to open our pools, so what we are going to do is delay the opening until July 5, so we have more time and give lifeguards opportunities to come work for us."

In May, the park district started offering signing bonuses to attract lifeguards and just Wednesday night they announced it will increase from $500 to $600.

The district will also temporarily ease a residency requirement for applicants who may live outside the city. Plus, qualified seasonal lifeguards 16 and older could get year-round jobs after the summer.

The current hourly wage for lifeguards is $15.88 per-hour.

"Those incentives are too little too late at this point," 15th Ward Alderman Raymond Lopez said. "And for what we're asking them to do, we can't just pay our lifeguards minimum wage with a $600 signing bonus."
Alderman Lopez is one of several aldermen upset by the delays, saying neighborhood children have nowhere to go in the heat.

"The only option we're giving them is to go open a fire hydrant and telling them to go play in the street because the city failed to plan for the summer, the heat and the need to open our pools on time," he said.

Meanwhile the park district said it will need 300 additional lifeguards to open pools on that target date in July, and, right now, they are keeping their fingers crossed.

"We can not give up on giving all of our residents the opportunity to have a pool in their community open. Unfortunately, if we do not get lifeguards sufficient to open the pools, it's gonna be a tough summer," Escareno said.

The shortage of lifeguards is being attributed in part to the pandemic, when many pools and training sessions were closed to young people.

"I wanted to start using the Chicago Park District pools that are outdoors. I was surprised it wasn't open," one father said outside Smith Park in Chicago's West Side Ukrainian Village neighborhood. "Hopefully the park district will be able to fill their current candidacy list."

The park district also said they're struggling to find applicants who are fully vaccinated, which is a requirement.

While heat alerts for the Chicago area have expired, the weather will still be very hot Thursday, with many seeking relief at the beach or at pools.