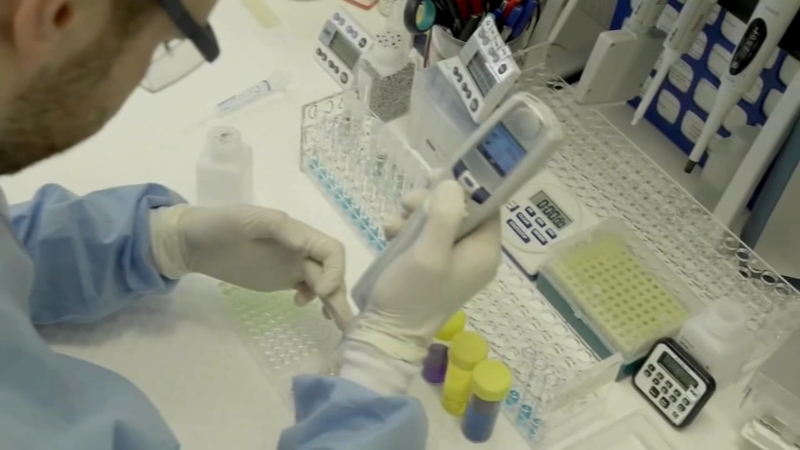 Officials say the overall COVID-19 mortality rate in Illinois' African American communities is five times greater than in white communities, with blacks in their 50s dying at 12 times the rate.

State officials said African Americans, in general, have higher rates of some of the chronic conditions that can lead to more serious COVID-19-related illness, but a lack of access to regular health care is also a factor.

"Generations of systemic disadvantages in health care delivery and in health care access in communities of color, and black communities in particular, are now amplified in this crisis," Pritzker said Friday, when the state's coronavirus death toll reached nearly 600.

"We will not stand idly by while one segment of the population bears an unfortunate, heightened burden of this disease," said Illinois Department of Public Health Dr. Ngozi Ezike.

State officials announced a series of initiatives aimed at increasing testing in the African American community, including a partnership between Lurie Children's Hospital and four community health centers on Chicago's South and West Sides.

The goal is to test hundreds daily in those neighborhood clinics, including Lawndale Christian Health Center.

"We must join together. We must practice these things that will mitigate our abilities to be infected. And we must connect with one another," said Lurie Children's Hospital Dr. Horace Smith.

Those community health centers will be among the first to receive the new rapid test machine from Abbott Labs, which can provide results in minutes.

Gov. JB Pritzker also announced a program to provide hotel rooms for people from multi-generational households who need to self-isolate.

Illinois Gov. JB Pritzker promises action to protect communities of color disproportionately affected by COVID-19 during a briefing on April 10, 2020.

On Friday, Illinois reported more than 1,400 new coronavirus cases and 68 additional deaths, a slight uptick from Thursday's report. But the governor said he still believes the rate of rise is starting to level off.

Gov. Pritzker said Thursday that new data shows the state may be "bending the curve" in the fight against COVID-19, but cautioned residents still need to practice social distancing and abide by the stay-at-home order.

"Our rate of rise is looking less and less exponential, that indicates to us that we are in fact bending the curve, there is even some evidence that we may be moving towards a flatter curve - but we need to keep watching the data on a daily basis," Pritzker said Thursday, exactly one month since declaring a disaster proclamation in Illinois.


On Friday, Prtizker tempered comments he made the day before that large summer gatherings might need to be canceled.

He said it's the data that will ultimately dictate what happens moving forward.

"I was merely suggesting that people should contemplate 'what if' because we need to follow what the scientists and the doctors tell us," Pritzker said.

The governor also said he still hasn't decided whether on-site schooling will be canceled for the rest of the year.

On Wednesday, Illinois saw the largest number of coronavirus deaths and cases in a single day: 1,529 new COVID-19 cases and 82 deaths.

Gov. Pritzker said he doesn't plan to lift the stay-at-home order before April 30, noting that COVID-19 cases and deaths are not yet trending downward in Illinois. Even after April 30, Pritzker cautioned residents that life will not return to normal all at once.

"The fact of the matter is we are not going to be able to truly move on until we have testing, much greater testing, contact tracing, and treatment," Pritzker said.

Meanwhile, Chicago Mayor Lori Lightfoot announced Thursday that the city's share of the federal stimulus package will be about $470 million with another $800 million going to CTA and $205 million to help Chicago Public Schools.

She also said that responding to the COVID-19 crisis has cost Chicago about $100 million, with much of that coming from preparing the McCormick Place alternative care medical facility.

There were temperature checks Thursday for staff reporting for duty as the alternate care facility at McCormick Place readies for an influx of the sick.

Though the facility will primarily care for patients with mild or moderate symptoms, the Illinois National Guard delivered 250 negative pressurized tents to be used as isolation areas for those whose conditions worsen.

"Air flow comes into the room, and airflow doesn't go out of the room, so the negative pressure is that the airflow is going into the room and not sending potentially hazardous room outside," said Lisa Roy, of Johnson Controls.

A time-lapse of the field hospital being constructed at Chicago's McCormick Place during the COVID-19 outbreak. (Photo credit: Alexis Hall )

"We're here to support the doctors, the medics, all the physicians that are out there," Brigadier General Richard Neely. "They're the ones that are on the front line. So we're enabling them to do their job."

"We are not seeing an indication to open McCormick yet, but we are following closely the capacity in all of the regions," said Illinois Dept. of Public Health Director Dr. Ngozi Ezike.

Officials say McCormick Place could start taking patients early next week, but that will depend on staffing.

"Some of that staffing comes in at different times," Pritzker said. "We're phasing the staffing in because it isn't like you can grab hundreds of people all at once and have them begin working all at once. That's a very difficult thing to do."

Meanwhile, the new shipment of supplies are the first of three to complete the massive project at Chicago's largest convention space.

"The problem right now is shipping across the country is a real challenge," said Brigadier General Neely. "So the only way to get them was to really airlift them. So we worked through the Department of Defense to get approval to move these aircraft so we could get them here in a timely manner."