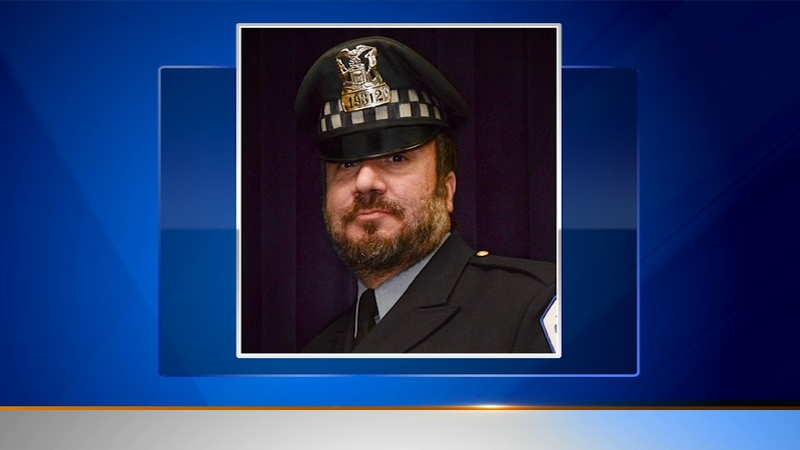 NORRIDGE, Ill. (WLS) -- Family and colleagues of the first Chicago police officer to die from COVID-19 paid tribute to him with a funeral and procession Thursday.

Officer Marco DiFranco, 50, contracted the virus at the end of March and was hospitalized before he passed away, Mayor Lori Lightfoot and Chicago Police Interim Superintendent Charlie Beck said at a press conference last week.

"Tragically, this officer gave his life to that fight. Our hearts go out to the individual's family, friends and fellow officers whose lives have been forever changed by this terrible loss," Mayor Lightfoot said.

Family of Chicago Police Officer Marco DiFranco as well as his colleagues gathered in their cars at a funeral home in NOrridge to say goodbye to the officer who died from COVID-19.

The funeral Thursday was a service unlike any other for a Chicago police officer. There were no bagpipes, nor was there a church service.

Instead, a long line of police vehicles sat parked, extending a half mile in either direction from the Norridge funeral home, where only DiFranco's family was able to enter.

Mayor Lori Lightfoot and other dignitaries remained in their vehicles, paying tribute to the 21-year veteran police officer while maintaining social distancing.

"The sadness is compounded by our inability to give him the kind of sendoff that is typical for a Chicago police officer whose life was taken in the line of duty. We're doing our absolute best to recognize the sacrifice, to recognize the daily sacrifices of first responders and healthcare workers during this time of pandemic," Chicago Police Interim Superintendent Charlie Beck said.

A funeral procession was held Thursday for Chicago Police Officer Marco DiFranco, who became the first officer in the department to die from COVID-19.

Officer DiFranco served alongside his brother in the Narcotics Division.

On April 2, he became the first Chicago police officer to pass away as a result of COVID-19. His death being classified as in the line of duty allows his family to receive additional benefits.

Thursday's service at Cumberland Chapels was private, for family only. But others were able to pay their respects by lining up in a procession and driving to the All Saints Catholic Cemetery in Des Plaines, where everyone except for family and command staff remained in their cars.

During the service, DiFranco's closest friends stood outside, watching and grieving from across the street.

"We are a very close-knit group of friends," said Teresa Di Rosa. "We all consider each other family."

Di Rosa said they were all devastated they weren't able to attend the service.

Officer DiFranco received 154 awards in his career including a Superintendent's Honorable Mention and Special Commendation.