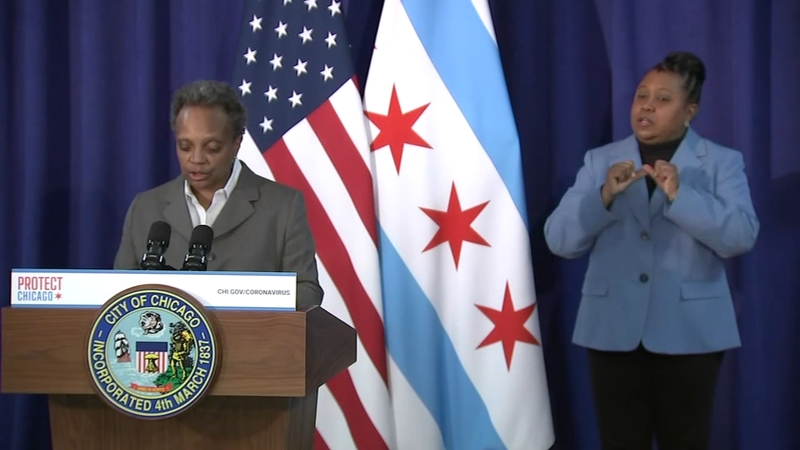 CHICAGO (WLS) -- Mayor Lori Lightfoot announced an expansion of COVID-19 testing in Chicago, including a new permanent test site at Midway Airport, as cases continue to rise in the city.

The city is transforming an unused employee parking lot just Midway Airport into a permanent drive-up testing site. The mayor emphasized that this site is not meant for arriving passengers at Midway, but instead has been created to serve the otherwise underserved Southwest Side.

"With this site we listened to the community that wanted more reliable testing on the Southwest Side, and one weekend availability for the first time," she said. "And we built on our ongoing efforts to drive resources where the resources are needed most."

RELATED: Where to find COVID-19 testing in Chicago area

"When I hear the mayor and the commissioner speak on this matter, they are so out of touch with reality, it's pathetic," Ald. Lopez said. "There is definitely a cultural ineptitude."

"What we see is that those individuals often have to double or triple up in their housing situations just to afford rent," said James Rudyk, executive director of the Northwest Side Housing Center.

Both areas are home to large LatinX populations.

"Our families have always been families that have either been bundled together because of economic necessity or because of familiar tradition," Lopez said.

"We're trying to change that messaging that sounds punitive and maybe not resonate with the folks we're working with to with what's actually happening on the ground," Rudyk said.

Lightfoot made clear that more testing isn't the answer to preventing the spread of the virus, but with cold weather setting in she wants it to be better and more accessible. The city is conducting more than 16,000 test per day, but as winter sets in plans are underway with city partner to make the testing more weather-friendly, both for those working at the sites and those coming for tests.

"We are deploying vans for mobile testing and, in partnership with Curative, trailers to be able to maintain those drive-thru operations, more kiosks. A lot of work has been done to think about what the winter is going to look like," said CDPH Commissioner Dr. Allison Arwady.

Mayor Lori Lightfoot announced an expansion to the community-based COVID-19 testing in Chicago, as the city responds to a surge in coronavirus cases.

In addition to the new testing site at Midway Airport, the city is also directing $14 million in grants and other resources that will go to healthcare and community partners for more testing and contact tracing.

One of the city's other sites will also be changing. The testing site at Dr. Jorge Prieto Math and Science Academy will be relocated to Charles A. Prosser Career Academy, 2148 N Long Ave. It will operate Monday through Friday from 10 a.m. until 4 p.m.

The city will also continue to use mobile testing every week in hard-hit areas.

"Chicago is setting new testing records every day and it is our highest priority to ensure that testing remains equitably accessible and available to Chicago's most vulnerable residents," said Mayor Lightfoot. "We will continue to work with partners and direct resources to the communities who have been hit the hardest by this pandemic."

Chicago has reported a 7-day rolling average of 16,259 daily COVID-19 tests as of November 17. The tests were performed at CDPH facilities and other providers, health centers and pharmacies.

"The best way to get tested is by calling your health care provider, but there are many other convenient and affordable ways to get tested in Chicago, including new at-home testing services," said CDPH Commissioner Allison Arwady, MD, MPH. "Additionally, we have partnered with community health centers to ensure that people, regardless of ability to pay, insurance or immigration status, have access to both testing and primary care."

The update comes as a Stay-at-Home Advisory took effect in Chicago on Monday, asking residents to stay home as much as possible and only leave for essential reasons such as food, work and medical care. The city has also announced return dates for a return to in-person learning for Chicago Public Schools students.

The city is also holding webinars for employees and businesses to remind them of COVID-19 protocols.

The city says employees are protected from retaliation for staying home from work for certain COVID-19 retaliations.