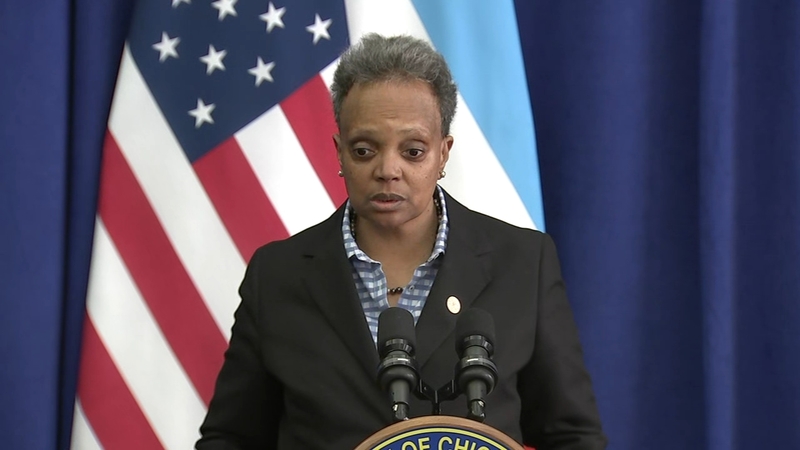 Lightfoot: No 'mass firings' for CPD after vaccine deadline passes

CHICAGO (WLS) -- Mayor Lori Lightfoot is trying to ease concerns that Chicago is about to lose several thousand police officers over the city vaccine requirement that applies to all employees.

A deadline for officers to get their first shot passed this weekend, but there's a question of what lies ahead for the officers still holding out.

"We will enforce the rules," Lightfoot said. "And my expectation is that the vast majority of police officers who are already vaccinated, will come into compliance."

Those who don't will be put on no-pay status. Sources say civilian CPD employees were called into headquarters Monday morning, with sworn officers starting Monday afternoon.

According to the mayor's office, there are currently a total of 3,154 city employees who not vaccinated. The vast majority of those - 2,367 - work for the Chicago Police Department.
As of Monday morning, 30 were in no-pay status because, according to CPD, they have refused to report their vaccine status into the portal. But the mayor said those officers who are refusing to comply will not all be fired at once.

"We're not doing mass firings today, which is one of the things a lot of folks have been propagating," Lightfoot said. "That's not going to happen. We're looking at the numbers we started to see last week and over the weekend. A number of people going to the portal were reporting that in fact they are vaccinated."

RELATED: Chicago mask and vaccine mandate to lift for some in line with state's plan

The head of the police union said a half a dozen people have quit since last week, rather than be forced to get vaccinated. FOP President John Catanzara said his message to officers is they have to do what's best for them and their families. But he expects many will stand their ground and refuse to get the vaccine.
"I know at least three veteran officers retired Friday afternoon, didn't even wait for the Sunday deadline. They were not going to be subjected to being called in, they said screw it," Catanzara said. "It's gonna happen quite frequently at headquarters on a daily basis, over and over and over again with the senior officers waiting until their turn is called. And they know that, that's why they are doing this slow walk."

In the latest twist in the vaccine mandate battle, 11 members of the city council have called a special meeting Wednesday asking for a vote on letting natural immunity to be accepted an alternative to being vaccinated.

"I mean, we're talking about safety of other officers who are left behind to not work extended hours. You're kicking officers off the payroll on one end, but you're calling other ones back from their days off canceled to cover parades over the weekend. It doesn't make any sense whatsoever, and the streets are going to get bloodier, there's no way around that," Catanzara said. "And that's going to be on every single one of their doorsteps: the mayor's, the superintendent's, the first deputy, every exempt member who stood on a corner and didn't do a damn thing to stop any of this."

The mayor said she expects more officers will continue to come into compliance with the vaccine mandate. At this point, nearly 99% of all city employees have complied with the requirement.

Chicago Police Department members who have reported that they are not vaccinated will begin reporting to Public Safety Headquarters today to discuss further steps in the vaccine mandate process. The first group of officers will be those who have reported that they have not received the COVID-19 vaccination and do not have a record of applying for an exemption before December 28, 2021 per a recent arbitration award.