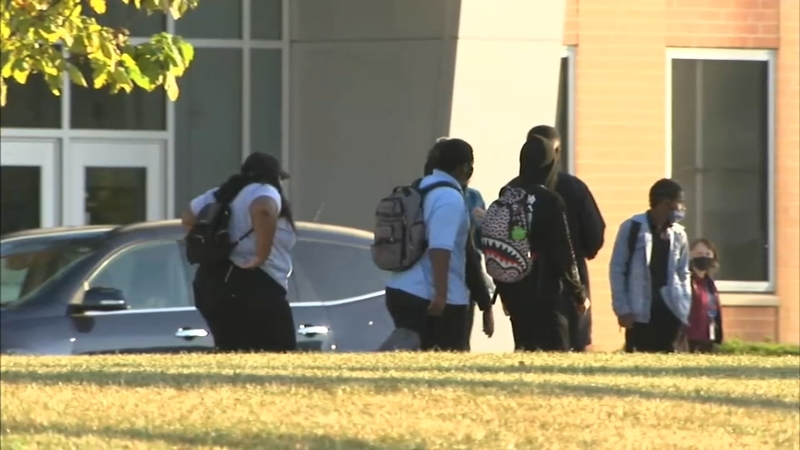 She's on a tour to talk about safety.

Dr. Allison Arwady said her staff is still investigating, but found no breaks in protocol.

It's a timely visit for the president of the national teacher union, as some parents and staff are still concerned about the safety of learning in-person in Chicago Public Schools.

But she said they were not allowed inside, so outside she made her message clear -- they want a safety agreement from the district.

"Where is the mayor, the new superintendent? The first action they did is to block us from being in the school," Weingarten said.

She demanded better testing, contact tracing and vaccinations for students.

This is all part of her nationwide "Back to School for All'' tour to stress the importance of returning safely to in-person instruction five days a week.

Since August, Weingarten has been crisscrossing the country, visiting 20 states.

This visit comes as CPS faces backlash for its own COVID safety protocols, as two mothers of students died from COVID-19 in the last week.

"It's not a mystery. We need CPS management, the mayor, all the resources of this great city, focused on getting these kids in school safely," Illinois Federation of Teachers President Dan Montgomery said.

One of them was 44-year-old Shenitha Curry, and her family believes she got the virus from her daughter, who is a fifth-grade student at Jensen Elementary School on the West Side.

Curry was not vaccinated, but her sister places the blame squarely on CPS.

"If my sister had lived three blocks west of where we are standing right now, and crossed over into Oak Park, it would be different," Curry's sister Jasyma Johnson said. "Because they have different safety protocols, different safety measures in place."

At one point, 11 of the 17 classrooms at Jensen Elementary were quarantined.

CPS said none of Jensen's cases are from in-school transmission.

Staff from Lurie Children's Hospital were on-hand at the school Tuesday to administer COVID tests to students and staff who requested it.

The Chicago Teachers Union said the blueprint is already there to keep everyone safe from the virus, but they believe the district and the city aren't doing enough.

"In the absence of an agreement means that after guardrails in the school building and others throughout the city. We, capital W capital E, deserve more," CTU VP Stacy Davis Gates said.

One example laid out is getting vaccinations inside the school, while allowing parents to give permission over the phone for their kids to get a shot.

The teachers union said the district hasn't responded to that request.