Delightful Pastries to produce over 50,000 paczki 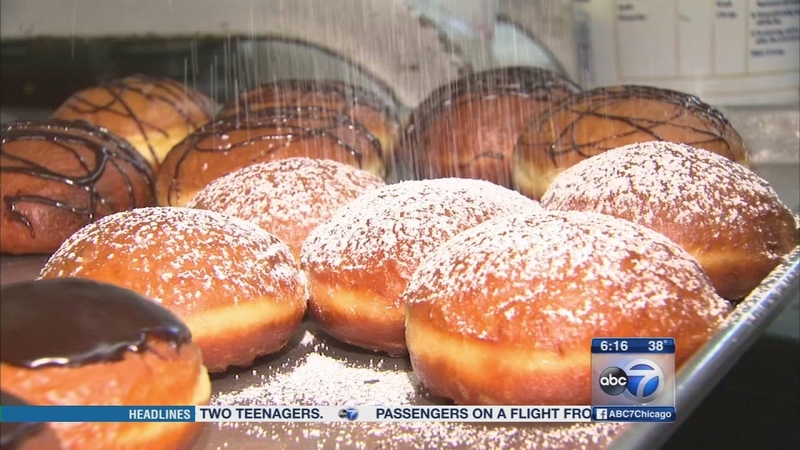 CHICAGO (WLS) -- The Super Bowl may be on Sunday, but for local Polish observers, the Super Bowl of pastries is already underway.

"Paczki Day" took place Thursday in the heart of the Polish community, but another wave comes on Fat Tuesday next week.

Our Hungry Hound Steve Dolinsky visited one of the city's premier sources of paczki, where they're producing upwards of 50,000 of them over the next few days.

Dobra Bielinski would prefer you not call them doughnuts. She and her family are knee-deep in paczki this weekend at Delightful Pastries in Jefferson Park, supplying three stores with tens of thousands of the traditional fried dough treats.

"You eat the paczki for the dough, you don't really eat it for the filling. It's got a delicious lemon oil, orange oil in it. It's got a little bit of rum in the dough, so it's really scented," Bielinski said.

They begin by weighing out the dough, then rolling it out over a special cut-out pattern, which, when placed into a machine, emerges in perfect spheres. After they've proofed and risen a bit, they get fried in vegetable oil until golden on both sides. Some get glazed, others get a shower of powdered sugar, but all of them get stuffed.

The glaze or topping - in this case, some candied orange peel - indicate what's inside. Bielinski says even though there's a bit of alcohol in the dough, it's there for a reason.

"The reason why you put alcohol in the dough is so that it doesn't absorb so much fat to the dough itself," Bielinski said.

That makes it healthier, right? Straight out of the kitchen is the best way to eat them of course, and don't blame the bakery's staff if they look a little weary after Fat Tuesday.

The paczki are on sale right now, so if you haven't already made your plans, I would suggest now would be the time to go get your paczki, because from now until Fat Tuesday, it's gonna be kind of a war zone.