Ahead of Hastert sentencing, public sends letters to court 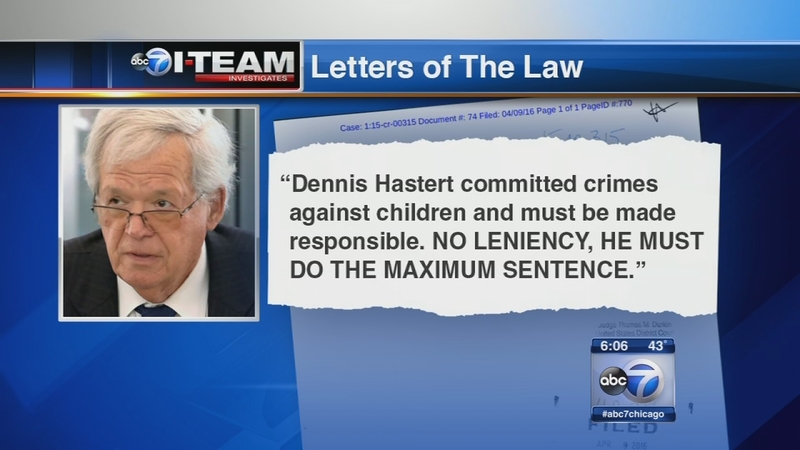 CHICAGO (WLS) -- As Dennis Hastert's sentencing date approaches, a stream of public letters are trickling in to the federal court, most of them addressed to U.S. District Judge Thomas Durkin who will determine the former U.S. House Speaker's future.

The I-Team has obtained letters written to the judge, who will sentence Hastert on April 27.

Although punishment in the U.S. justice system is not done by referenda or a voice vote on the town square, the public is weighing in on Hastert's fate. The "letters of the law" show a wide range of public passion about the ex-Illinois congressman whom authorities say sexually abused teenage boys and then paid hush money.

A letter from a 64-year-old Chicago man states: "The Dennis Hastert case sickens me. I went to a Catholic high school in Chicago and what I saw that occurred between some classmates and teachers/coaches scared me. But this was 1970 to 1974. What could you do?"

An emailer sent two sentences to the court: "Dennis Hastert committed crimes against children and must be made responsible. No leniency, he must do the maximum sentence."

Government prosecutors are asking for no more than a six-month sentence after Hastert pleaded guilty to financial crimes in structuring the hush money scheme. He was not charged with sex crimes against children, largely because the alleged incidents occurred so long ago and are beyond the legal statute of limitations.

However, in their sentencing presentation against Hastert, prosecutors intend to use evidence of sex crimes against teenage boys. The government may call at least one witness, a now-adult man who claims Hastert molested him when he was 14 years old and a student wrestler on a high school team Hastert coached.

The director of a southwest suburban organization that helps childhood trauma victims wrote to the judge: "I suggest that part of the sentencing include a $100,000 to $500,000 contribution to the Childhood Trauma Treatment Program."