E-scooters will be allowed between Armitage, Pershing and from Lake Michigan to Damen
WLS
By Jessica D'Onofrio and Michelle Gallardo 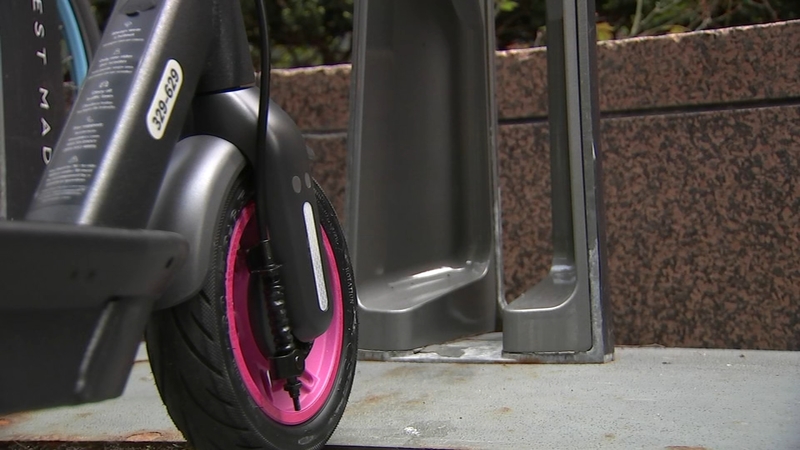 E-scooters return to parts of Chicago

CHICAGO (WLS) -- Divvy e-scooters debut in Chicago Tuesday, and there's something that sets the program apart.

For the first time, they have made their way into the Loop, using the same docking stations that are already used for Divvy bikes.

"We want to provide legal structure so that vehicles are where they should be and not impeding pedestrian traffic," said Divvy General Manager Tamara Conway.

Getting scooters out of the public way was one of the biggest lessons learned during the first time the city trialed a shared scooter program back in 2019. The other was figuring out a way to stop people from using scooters on the sidewalks. Hint: you will be tracked and fined.

"The scooter can signal when it's on the sidewalk and it shouldn't be. We'll send push notifications and make sure the person riding the scooter gets off the sidewalk," said CDOT Commissioner Gia Biagi.

For now, shared scooters will be operational only within certain boundaries: Armitage to the north, Pershing to the south and from the lakefront to Damen.

"The scooters will not be allowed on the lakefront trail, the Chicago Riverwalk," Conway said. They'll just stop rolling. You'll have a few feet. It won't be abrupt."

The city has granted Divvy a two-year license. In addition to Divvy, three other companies are receiving two year licenses to operate a shared scooter program in Chicago. Among the conditions imposed on them are that at least 50% of scooters must be deployed in "Equity Priority Areas" on Chicago's South and West Sides, and scooters may only operate between 5:00 a.m. and midnight.

"I love Divvy. It takes me all over the city. It's kind of like public transportation," said Katy Dehaven.

More than 200 Divvy stations will now accommodate both bikes and scooters in the same docking stations.