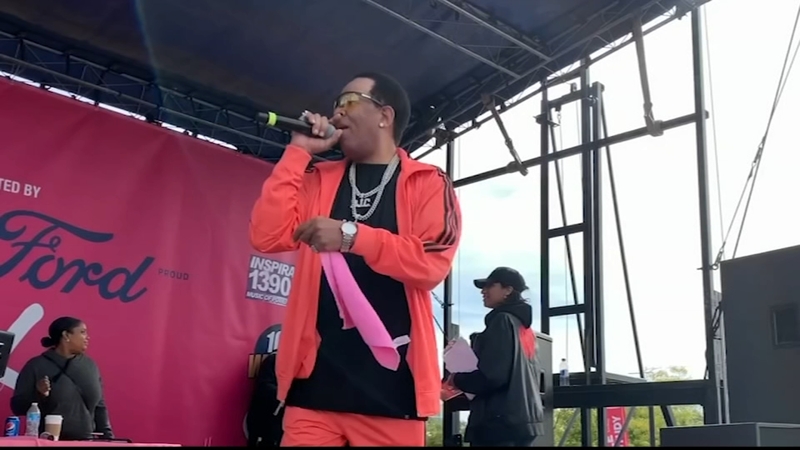 CHICAGO (WLS) -- Answer Cancer is an initiative aimed at wiping out that deadly disease, and a popular local entertainer is doing his part.

There is little doubt he hasn't had you on the dance floor many, many times. If not, for decades you've likely heard those famous beats.

When he's not making beats, Willie Perry Jr. is working hard to beat a deadly disease.

Perry, who goes by DJ Casper, is known for one of his hits that is practically a must-play for many celebrations in Chicago and around the world. But life for the man behind the "Cha Cha Slide" has been anything but real smooth.

He also had detached retinas which led to major eye surgery, but it wasn't until just a few years ago that the real battle for Perry began.

"In 2016, they diagnosed me with two forms of cancer. Renal and neuroendocrine, which is kidney and liver," Perry said.

It was a life or death situation that led to a long, hard journey. Although it was a struggle at times, DJ Casper's cancer is now in remission and he says he's a changed man.

"Maybe in the process of me going through the cancer situation, that was God's way of just slowing me down just a little bit," he said. "But he kept me here for a reason, definitely for a reason."

Perry said he believes this is part of the reason he's still here. He regularly comes to Stroger Cook County Hospital to meet with other men fighting similar health battles, like fellow cancer patients Rene Stuart and Alonzo Nichols.

"All it takes is one person to step out and say 'this is what happened to me,' and serve as a resource for the next person, so that it doesn't happen to them," Dr. Hollowell said.

That's also why you'll often find DJ Casper at many cancer charity events around town, like the recent "Sista Strut" at the Kroc Center on the Southside, where everyone got busy with, of course, the "Cha Cha Slide."

"If you have the disease that they call cancer and you feel that you can get up and do this dance, let's do it because that makes you feel better," he said. "As long as you're keeping that positive mind like 'hey, we're gonna beat this, I'm gonna win,' you know you can do it."

Believe it or not this is the 20th anniversary of the Cha Cha Slide and it shows no signs of slowing down. You hear it in commercials, at sporting events, and at every wedding or reunion, or any gathering.

DJ Casper is hoping to break the Guinness World Record next year by having people all over the world do the dance at the same time to raise money for cancer research. He calling it the Dime Drive and is asking everyone to donate a dime.

Saturday, October 26, he's having a Dusties Music Convention at the Grand Ballroom on Cottage Grove. Part of those proceeds will also go toward cancer research.