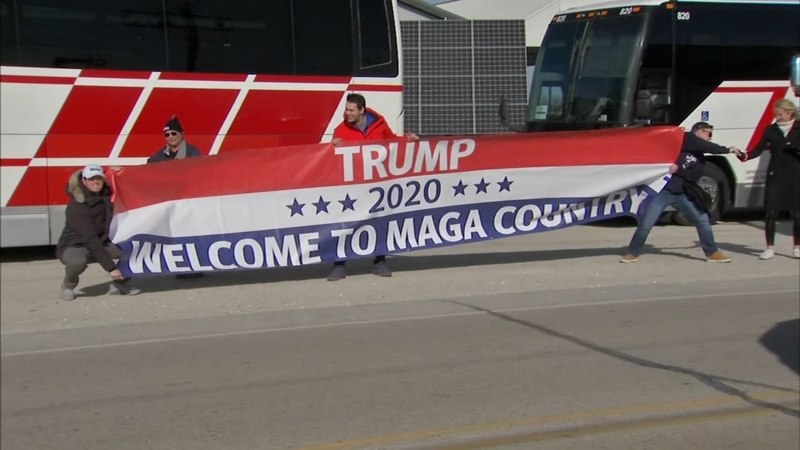 KENOSHA, Wis. -- President Donald Trump is making one of his last election campaign stops Kenosha, Wisconsin, the lakeside city that's seen much unrest and destruction this summer in a county he won by less than 300 votes and a city he didn't win at all in 2016.

On the ground in Wisconsin Monday night, the president said a Supreme Court decision to allow mail in votes in Pennsylvania to be counted after Election Day could lead to violence.

In the waning hours of his second campaign, Trump asked Kenosha voters to help give him another term in the White House.

Kenosha voters squeaked out a win for then-candidate Trump by the narrowest margin of any county in a state that helped make him President Trump.

A second victory here in Wisconsin would also be a surprise. the latest ABC News/Washington Post poll released last week has Trump trailing former Vice President Biden by 17 points in the state of Wisconsin.

Some people in the area were excited for the president's visit, and eager for a second term.

"Our economy has been great the last four years," said Amy Smith, owner of Jerry Smith Produce and Pumpkin Farm. "That's huge. He loves America more than anybody, any other president."

But in few places in the country is COVID-19 as rampant as in Wisconsin, where case numbers are surging. And not everyone attending the rally Monday night is a Wisconsonite.

"I think the whole COVID thing is a little overblown," said Michael Robinson, a Trump supporter who traveled from Indiana. "Like Trump has been saying recently, if you want to wear a mask, if you don't I shouldn't' be forced to."

The state of the pandemic in Wisconsin is helping catapult early voting and vote by mail returns; 59 percent of registered voters in Kenosha County have already cast their ballot.

Early voters waiting in line at Kenosha's municipal offices couldn't miss the dozens of buildings still boarded up in this little lakefront city. They might have passed the post office with its covered windows, the plywood-fortified dinosaur museum or the barricaded jeweler, yoga studio or grocery store.

Many of these businesses are open, but they are also hedging their bets, covering up windows and sometimes building outer sets of plywood doors that can be easily shut, like castles pulling up their drawbridges, if trouble returns. With a divisive election just a day away, it's no surprise they're being careful.

Yet two months after street violence shook Kenosha, far more businesses have taken their plywood down. The music store is selling ukuleles again. Neighborhood taverns are serving cheap beer and good company. People are walking along the Lake Michigan waterfront, even if the winds are increasingly bitter.

Kenosha has been battered, but it's certainly not defeated.

"This city is a lot stronger than people give it credit for," said Anthony Kennedy, an African American alderman.

Greg Guthrie emerged from the municipal offices late last week and said he doubted the violence had shifted the political ground very much.

"I don't think it's changed anyone's vote," the 51-year-old mechanical engineer said. "But I think it's probably increased the turnout."

"It's galvanized both sides" of the political divide, which he believes has only grown wider.

What happened in Kenosha and in other American cities during a summer of protests could be critical to the outcome of Tuesday's presidential election in Wisconsin and other battleground states. For President Donald Trump and his law-and-order campaign, protests that skidded into violence show that only he can keep such unrest from spreading. But for African Americans, racial minorities and many Democrats, the killings of Black people by police officers, which set off most of the demonstrations, show that America is in desperate need of change.

The trouble in Kenosha began on Aug. 23, when a police officer, responding to a call about a domestic dispute, was seen on video shooting Jacob Blake repeatedly in the back at close range. Blake, a Black man, was left paralyzed from the waist down.

The shooting set off waves of protests , some of which turned destructive. Buildings and cars were set on fire and stores looted.

The violence spiked on Aug. 25, when two protesters were shot and killed and another was injured. Kyle Rittenhouse, a white 17-year-old who came to Kenosha that day with a semiautomatic rifle, is charged in the shootings.
RELATED: Antioch teen Kyle Rittenhouse charged with murder, attempted murder for deadly shooting at Kenosha protest

Rittenhouse's lawyers have called him a patriot acting in self-defense while defending the streets of Kenosha. If convicted, the teenager, who is from just across the state line in Antioch, Illinois, could spend the rest of his life in prison.

He was among a number of armed white men who came to Kenosha, saying they wanted to protect property during the unrest.

"As awful as the property damage was, and it was awful, it's not as bad as taking lives," said Kennedy, whose district includes the street where Blake was shot. "It wasn't the left (who killed people). It wasn't antifa. It was a white boy from Antioch who came to our town and killed two people."

The August shootings have spurred political involvement in Kenosha, with the formation of activist groups and thousands of people signing up to vote.

"People are asking some very hard questions and demanding answers," he said.

"The amount of voter apathy in our town is shocking," Kennedy said. "But in September we had 4,000 new voter registrations" in surrounding Kenosha County, which has some 95,000 registered voters.

Those new voters could be politically potent.

Trump won Kenosha County in the 2016 elections by fewer than 300 votes, while the city of Kenosha went solidly for Hillary Clinton.

RELATED: Trump supporters, Black Lives Matter protests draw hundreds to downtown Kenosha during visit
A city of about 100,000, Kenosha was once home to a huge Chrysler assembly plant that closed in 1988. Now Amazon distribution warehouses have become major employers.

Trump has made the violence in Kenosha and other American cities a key part of his reelection campaign, blaming Democrats and saying violence would spread if Democratic nominee Joe Biden defeats him.

"These are not acts of peaceful protest but, really, domestic terror," Trump said in a visit to the city about a week after Blake was shot.

Trump is expected to hold a rally in Kenosha on Monday evening, hours before polls open, a sign of how important he sees law-and-order issues to his reelection.

A new poll from Marquette University Law School has Biden leading in Wisconsin with 48% of the support of likely voters, ahead of Trump with 43%. Those numbers that have changed little since the school's polling in early September. However, the polls also show a jump in Trump's approval numbers in Wisconsin since mid-June on how he handled the protests, rising from 30% to 40%.

Trump's rhetoric infuriates Nathan Upham, a 23-year-old Kenosha activist who blames the president for not understanding the anger and frustration over racial injustice and police violence at the root of the protests.

"You're painting this terrible picture of the real activism work that we're doing," he said. "It's pretty much a slap in the face."

Kenosha officials are concerned that armed civilians could descend on the city again if trouble emerges around the election, but they see no sign of it yet.

"I'm always going to be concerned about violence," said Andy Berg, a member of the Kenosha County board of supervisors. "But at this point it's all speculation."

"They came in and their intention was to intimidate, to scare and create confrontation. And they did exactly that," Beth said in an October interview with the Wisconsin radio station WTMJ. "And we had a 17-year-old who shouldn't have been carrying an assault rifle through the streets of Kenosha ... I couldn't have asked for a worse ending to that Tuesday night."