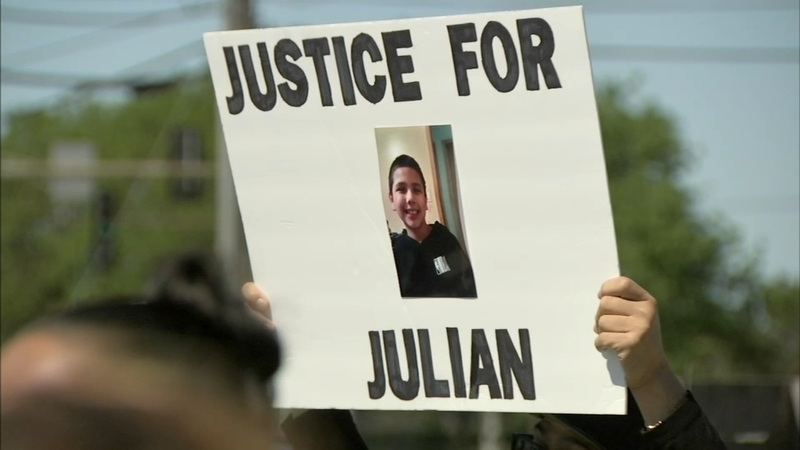 BEDFORD PARK, Ill. (WLS) -- One mother is determined not to let her son's death be in vain.

Veronica Cerecer, along with family and friends, stood at the intersection of Cicero Avenue and State Road in Bedford Park, where her son, Julian, lost his life nearly two weeks ago.

The group chanted for hours, with a message to drivers during this holiday weekend.

"I could be here every day, every day if I have to. I'm gonna make sure, as much as I could do, whatever I could do, just to bring awareness," Cerecer said.

Bedford Park police said on May 16, just after 10:30 p.m., officers responded to a multi-vehicle crash at the intersection.

The crash involved a total of six vehicles, and injured nine people.

One of the nine was 8-year-old Julian Ocegueda, who tragically died.

"Julian meant everything to us," his aunt and godmother Socorro Cerecer said. "He was an amazing little boy; he should still be with us today, but he is not because of some selfish act."

Police said the man who allegedly caused the crash was driving under the influence.

"I lost my son, and I really don't want anyone to feel the pain that I feel that I have to go through," Cerecer said.

Police said a 50-year-old Chicago man, Alfonso Lopez, was allegedly driving the car that hit the 8-year-old boy, as well as three other occupants, who were injured.

Veronica said they stand here today in hopes those getting behind the wheel will think twice if they've had too much to drink.

"Please do not drink and drive. Please do it at least for Julian. Julian Michael Ocegueda I love you, mi hijo. You are missed so much," Cerecer said.