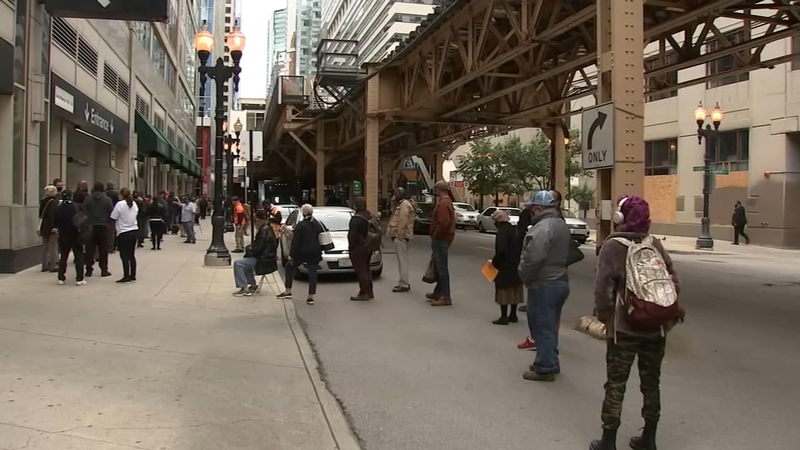 CHICAGO (WLS) -- Hundreds lined up in Chicago as early voting began Thursday morning at the Super Site in the Loop located at 191 N. Clark Street.

A line wrapped around an entire city block, but voters said the wait was only about 30 minutes to get in. Election judges said off-camera they have never seen anything like it.

Former Chicago Mayor Rahm Emanuel and Rev. Jesse Jackson cast their ballots as well. While the Chicago Board of Elections has received over 450,000 requests for mail-in ballots, many decided to vote in person anyways.

"I want the satisfaction, like slamming a door or hanging up a telephone, to hit the submit button," Chicago voter Dwight Jambor said.

Many with mail-in ballots who don't want to risk using the postal service took advantage of the Loop early voting site's dropbox. Anyone dropping off mail-in ballots doesn't have to wait in line.

By midday, the dropbox was so full, it had to be emptied to make room for more ballots.

Once inside, the Super Site at Clark and Lake is pandemic ready. Social distancing is being enforced and people are required to wear masks.

It is the only location allowing early voting in the city right now, but early voting will expand to locations in all 50 wards on October 14th.

Many voters said they're not confident about voting on Election Day.

"I'm thinking about today now and what I need to do to make sure that everything happens the way that I need for it to to say my vote counted," early voter Adonya Collins said.

While some voters prefer in-person voting, election officials have pushed mail-in ballots as a secure way to vote during the pandemic. And as long as it is postmarked by November 3, your vote will count.

As of Thursday, the Chicago Board of Elections reported more than 450,000 vote-by-mail applications. As of 9 a.m. Thursday, more than 8,000 had been returned.

The highest number of vote-by-mail ballots previously requested was during World War II, with 116,117 applications.

Unbelievable turnout for early voting in Chicago. The Loop Super Site at Clark and Lake opened this morning and it’s the only early voting site open in the city for now. More to come soon. Line wraps around an entire city block. #vote #chicago @ABC7Chicago pic.twitter.com/fJj5kt5eQq

In Cook County, early voting begins at 69 W. Washington on October 7th. On October 19, early voting will expand to 53 suburban locations and a site at Union Station.

"These early voting sites will also have secured drop boxes, where voters can return their completed ballots in their signed, sealed delivered envelopes," said Marisel Hernandez, chair of the Chicago Board of Elections.

"We both have developed mail voting mechanisms for the mail ballot to be processed in the most efficient and safe manner," Cook County Deputy Clerk Ed Michalowski said.

While mail-in and early voting are encouraged, election officials are gearing up for day-of voting, too. In Chicago and suburban Cook County, thousands of election judges have signed on. There is also a possibility that sports arenas may be used as voting sites.

"We are still in talks to sports authorities to see what possibilities there can be to making voting more accessible," Hernandez said.

Be warned: it's a very long ballot this year. Election officials are asking voters to plan your vote, and you'll soon be able to find a sample ballot online.

And they're reminding voters to wear masks. If you don't have one, the Chicago Board of Elections will provide one.