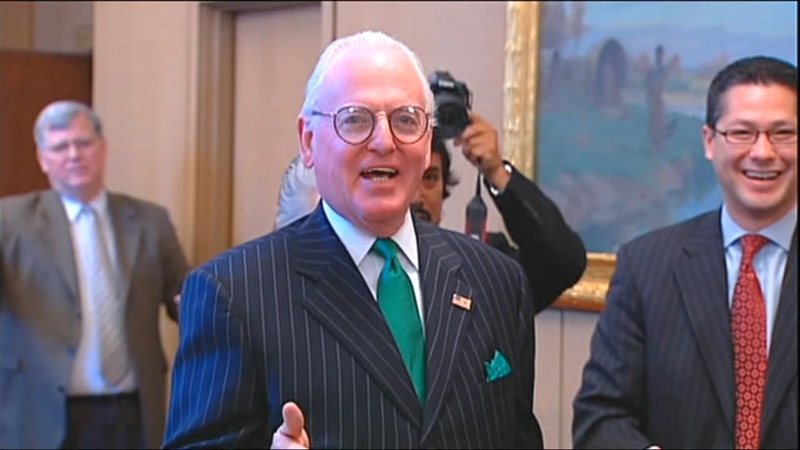 CHICAGO (WLS) -- Mayor Lori Lightfoot is calling on Alderman Ed. Burke to resign after he and his top political aide were named as defendants in a federal bribery case against Lake Forest developer Charles Cui.

Prosecutors say Cui used Burke's law firm for property tax appeal work as he tried to secure a sign permit for a Northwest Side redevelopment.

In January, Burke was charged with one count of attempted extortion for allegedly trying to force a fast food restaurant to use his law firm in exchange for a building permit.. The alderman has maintained his innocence.

"The allegations in this superseding indictment are alarming. The indictment alleges that Ald. Burke used his position and the tools of government to facilitate a criminal enterprise to enrich himself and cheat the residents of this city. No official in this city - elected or appointed - should ever profit from his or her office. Given the serious nature of the allegations, and particularly the allegations that he abused his position as chairman of the Finance committee, Alderman Burke must resign immediately. Given the serious criminal liability he faces, Alderman Burke can no longer continue to do his job honorably or effectively. It is in the best interests of all that he step aside so that the residents of the 14th ward can be properly represented. I have also directed the City's Corporation Counsel to investigate whether any current city employees or vendors were complicit in facilitating the crimes alleged in the superseding indictment. If so, we will not hesitate to take decisive actions against anyone whose conduct violated any laws or ethical rules."

Alderman Burke's legal team released a statement saying, "For over 50 years, Ed Burke has served the citizens of the 14th Ward and the City of Chicago honorably and tirelessly. His accomplishments on behalf of the community and his constituents are notable and many. Any suggestion that Alderman Burke abused his position as a public official for personal gain is simply not true. The charges are unfounded and not based on actual evidence. We welcome the opportunity to present the complete picture and all the facts to a jury. We are confident that when that happens, Ed Burke will be vindicated."