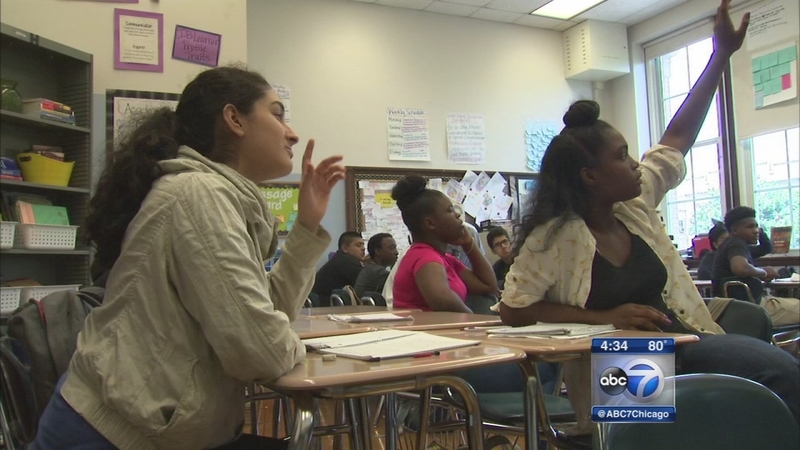 Meanwhile the district trumpeted a University of Chicago report that says the graduation rate is up nearly 20 percent in the past five years.

"That would not happen without improvements in our neighborhood schools," said Janice Jackson, CPS chief education officer.

Jackson said despite the district's money problems, test scores are up at every level.

"If students are on track, they will graduate from high school and that's exactly what's happening," Jackson said.

However, Rauner said too many CPS schools -- because of decades of poor management -- still are not up to par.

"Many of them are basically, almost crumbling prisons," Rauner said. "They are not a place that a young person should be educated."

Rauner, in the belief the overall state budget impasse will not be resolved soon, wants a special appropriation to fund schools at the same level as last year. He doubled down on his opposition to what he calls a "Chicago bailout."

"I understand why they want a bailout, but a bailout is not fair to the rest of the taxpayers," Rauner said.

Mayor Rahm Emanuel and CPS officials said if schools are funded at the rate Rauner proposes it would mean teacher layoffs and drastically increased class sizes.

"Springfield, if they do not step up and do their job, will pull the rug from underneath the kids of the city of Chicago and their parents," Emanuel said.

On Monday, more than a dozen school superintendents sent a letter to Rauner, accusing him of playing politics with education funding.

At Senn High School on the North Side, students worry the politicians are putting their futures in jeopardy.

"We as CPS kids are not oblivious to everything that's happening. We are very well aware," said student Ireon Roach.

"It's very concerning because it puts my entire year at risk," said student Liam Hudson.

"I need to learn in order to succeed later on in my career and they're holding you hostage? Yes, basically," said Senn junior Chintan Holler.

Rauner said the mayor and other Democrats will not publicly see things his way because they are afraid to buck Illinois House Speaker Mike Madigan. Rauner doubled down on his insistence on reforms before he'll agree to a budget.