WLS
By Diane Pathieu, Leah Hope and Will Jones 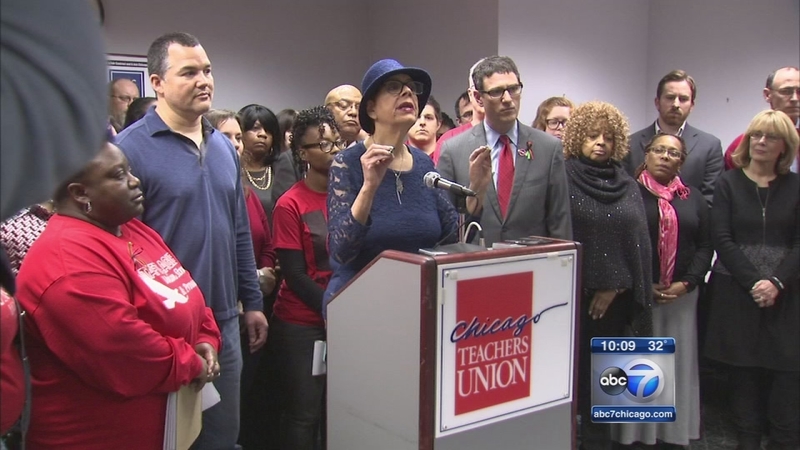 CHICAGO (WLS) -- A 40-member bargaining team has unanimously rejected what had been called a ''serious offer'' from Chicago Public Schools.

The teachers union said they received a serious offer from CPS last week. Although details were not disclosed, the letter said the offer trades economic concessions for job security. The proposal would also prevent any mid-year layoffs and preserve class sizes.

CTU President Karen Lewis said following the vote she knows this isn't the result the public was expecting. Lewis says she knows there may be a perception that they did not give enough.

"If you look over the past 5 years, 10 years, 15 years, we have been constantly asked to give," she said, citing a lost raise and unpaid pensions.

CPS responded by saying it was committed to returning to the bargaining table and working "around the clock" to hash out an agreement.

"Despite unprecedented financial problems that threaten our classrooms, CPS reached a tentative agreement with CTU leadership after 14 months of negotiations - including 18 straight days at the end of talks. This agreement provided pay raises, guaranteed job security and met the union's key demands, including restrictions on charter school expansion, raises for seniority in addition to cost-of-living increases, and more classroom autonomy for teachers," the CPS statement said. "While we are disappointed by today's result, CPS remains committed to reaching an agreement with our partners at the CTU that is in the best interest of our students, parents, teachers and city."

Now begins a 105-day fact-finding period, at the end of which teachers can strike if no agreement is reached. That would end May 16. But Lewis refused to promise teachers would wait that long to strike.

"It depends if they break the law. CPS has done it in the past. If they've broken the law, then we may see something," she said.

Lewis said the proposal divides the union too much, citing an interest in keeping "our union strong."

"We're not gonna create a two-tier system and cause division between our ranks," she said. "We're not gonna pit high school vs. elementary even though we have very different issues sometimes."

The Illinois Policy Institute said the contract offered to CTU was already more than taxpayers in the city can afford.

"Chicago Public Schools teachers already are the highest-paid of any teachers in the nation's 10 largest school districts. The average CPS teacher will collect $2.4 million in lifetime earnings, according to the National Council on Teacher Quality," an IPI news release says. "The amount of pension benefits accrued by CPS teachers has increased by 400 percent since 1987. Put simply, the amount of pension benefits promised to teachers has increased at a rate of 6.1 percent each year over the past three decades - more than twice the rate of inflation."

Lewis said the bargaining team didn't trust the language in the contract. She said the last contract "looked pretty good" but that CPS officials were able to circumvent and negate promises they made in that agreement. She said in the previous contract, CPS skirted language about principals bullying their staffs and promises not to increase paperwork for teachers.

The big bargaining team of Chicago Teachers Union met today to go through the 50 page contract offer line by line. Afterward, they shared concern about challenges they and their students face, they say, would be made worse under the terms of this proposed contract.

"This is about the soul of public education the schools our students deserve need to be funded," said Dr. Monique Redeaux Smith, CPS teacher.

The contract would have required CTU's 27,000 members to pay more in the pension and healthcare but offered 2.75 percent and 3-percent raises at the end of the four-year contract. Those numbers were contingent on a certain number of teachers retiring.

"We cannot allow our most experienced educators to be pushed out of our schools at a time when they are most needed," said CPS teacher Jim Cavallero.

"We're not saying it's impossible to happen, but we do know we need better assurances," Lewis said.

Lewis also asked CPS to show some good faith, and continually brought up TIFF money as an untapped source of money. She says anywhere from $150 million to $700 million could be trapped in TIFFs.

"Take the money, put it into the schools. Do it," she said.

Union reps said they're also banking on a bill in Springfield that would provide a surplus to distressed schools and take aim at transparency about what type of money is currently available. The bill, said Stacy Davis Gates, would define obligated and anticipated money.

"They could have a project set to kick off in 2021, and the money sits there," Davis Gates said. "How many piggy banks could they empty out?"

Davis Gates also took issue with the city's efforts to work with the fire and police unions but not with the teachers.

"They raised property taxes for them. Something like that can be done for us as well," Davis Gates said.

Now, many parents and students are left wondering what will happen next.

"I'm thinking they are going to strike. I am hoping they don't but they have to get paid as well," said Byron Meadors, a grandparent.

"I thought they should have been a little more considerate to everybody is going through lean times," said Andrew Tart, a great grandparent.

"I think the teachers union wants him to go to Springfield to convince lawmakers to bring the buck home. He has been trying to do that without much result. This doesn't help him make the case," Washington said.

Washington says neither side wants another strike.

"The funding situation is so dire. The threat of bankruptcy is so real. A strike would push the system over the edge," Washington said.

So now it's back to the drawing board, and the students remain hanging in the balance.

"I am worried about a strike. I mean as much as I love not having to go to school and hanging out at home," said Cole Tansuy, a 7th grader.