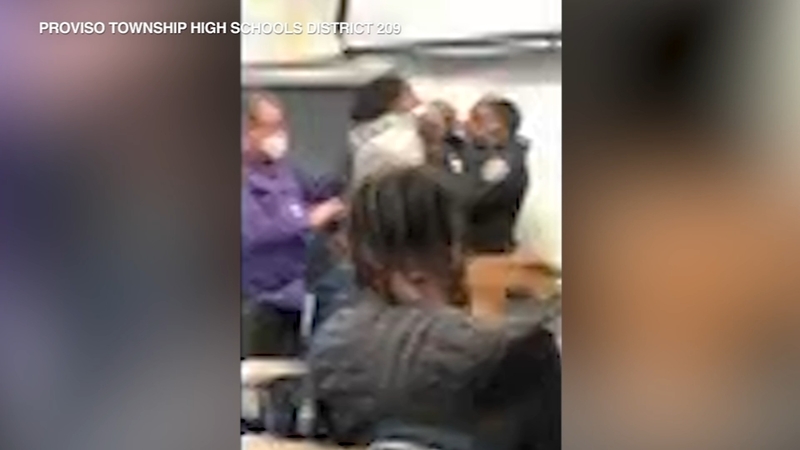 HILLSIDE, Ill. (WLS) -- A newly hired school security guard has been charged with battery after being accused of physically assaulting a student at Proviso West High School in Hillside last week.

Eligah Skinner, 25, has been charged with aggravated battery in a public place and official misconduct in the incident.

Grainy video released Friday night appeared to show an employee grab and throw a student to the ground in a classroom in an "unprompted assault" at Proviso West.

According to court documents, Skinner was a newly hired off-duty Phoenix Police Officer, working as a security officer at Proviso West. He's accused of battery against a 17-year-old boy, who is a senior at the school.

"I'm dumbfounded just like everybody else," said Hillside Police Chief Joseph Lukaszek. "The student is upset. The parent is upset. He's upset. He's scared. He's nervous. I talked to him personally on Saturday. I told him police officers don't do this. I think he'll be OK."

Prosecutors said Skinner is a sworn officer but is still in training and has not yet been fully certified. He was working part-time for Proviso Township High Schools District 209 at the time of the incident.

Court documents say the victim was drawing on a white board Friday with permission from his teacher when Skinner, who was holding a deflated dodgeball in his hand at the time, entered the classroom without permission from the teacher and ordered the student to stop drawing.

When the boy refused, Skinner allegedly threw the dodgeball, a bottle of lotion and a water bottle at him.

Students began videotaping the incident as Skinner reportedly took the boy's marker, then picked the boy up and threw him on a table, then desks and then the ground, according to court documents.

Skinner is also accused of placing his knee on the boy's chest and his hand around the student's upper chest or neck area. The boy said he had a hard time breathing.

Eventually, the student was released and the police were contacted, prosecutors said.

"We interviewed the teacher, 22 students, the parents, everybody," Lukaszek said. "He had no reason to be in the classroom whatsoever. He was not invited into the classroom. Nor was he sent to the classroom. So anything that happens afterwards is his fault."

Skinner reportedly admitted he did throw various items at the student but said the boy initiated it.

Teachers and classmates said the victim was never aggressive toward Skinner.

"I am extremely disappointed, no -- I'm upset by what transpired today. No adult should ever put their hands on a child in that manner - especially not in a school setting," Superintendent Dr. James Henderson said in a written statement at the time.

Henderson said he directed school staff to contact authorities immediately and the assailant was taken into custody. He will not be allowed back on school grounds, the superintendent said.