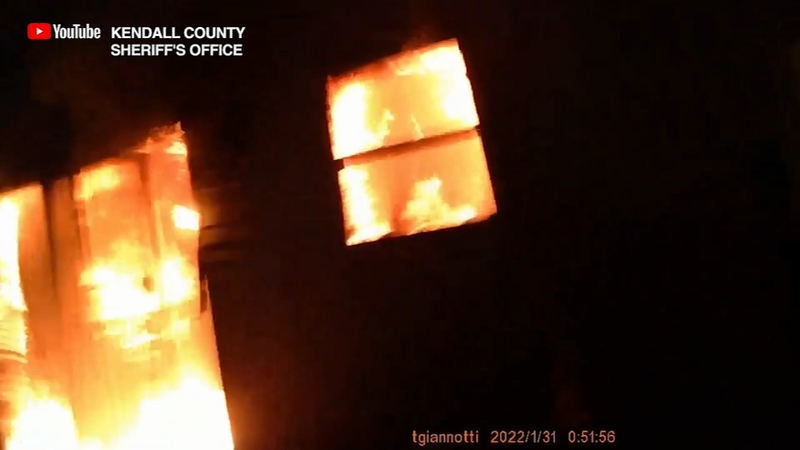 MONTGOMERY, Ill. (WLS) -- A frantic rescue of two people and a dog trapped in a burning west suburban home was captured on body cameras.

It was just past midnight Monday when Three Kendall County deputies responded ahead of the fire department to a townhouse complex burning in Montgomery.

Within 15 seconds a victim was jumping for her life. Giannotti had nothing but himself to buffer her fall.

"There was a ton of smoke it was hard to see and then I noticed the first victim starting to come out the window," said Giannotti. "She kind of took a more of a head-first approach to it and my reaction was I need to catch her because this could end badly if she fell."

"It was a total Adrenaline dump. I know myself and Deputy Giannotti were determined to help those people and to see the end result of it I mean that's what we both wanted," said Mielke.

The force of a woman falling from 20 feet knocked Giannotti's body camera and glasses to the ground.

"I was saying 'okay, okay, okay' kind of, don't know," recalled Gionnatti. "And she came down and I kind of bent my knees and that is when she fell forward after hitting me."

The second victim then jumps.

"We both knew at that point this was a life or death situation they were either going to burn alive," said Mielke.

The bodycam of the third member of the team shows the officers hustling the victims away from the burning structure just as a backdraft causes it to erupt,

Between them, these deputies have an average age of 28 with just 4 1/2 years of experience on the force. But they knew what to do when they had to.

"Whether we get there before the fire department or not basically becomes irrelevant in our minds because we are going to save some lives," said Deputy Sam Markusic.

The victims were eventually reunited with their dog who they tossed out the window first and was taken away by Oswego first responders. They remain hospitalized with non-life threatening injuries.

"I wouldn't have it any other way to but to work beside these individuals," said Gionnatti.