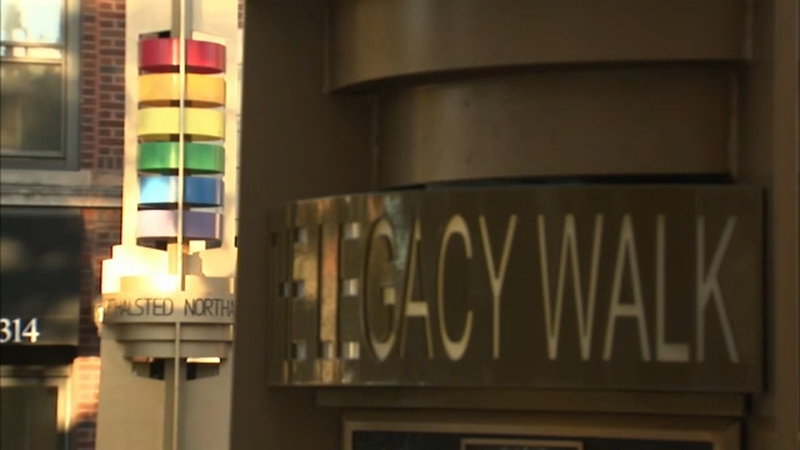 Chicago's Legacy Walk highlights those who fought for LGBTQ+ equality

CHICAGO (WLS) -- Police bar raids targeting gay people and secret underground newsletters warning the gay community of dangers may sound unimaginable now, but it was happening in Chicago decades ago.

October marks LGBTQ+ History Month and ABC7's Jason Knowles is finding out more about the people who helped to advance gay rights in our area.

The Stonewall riots erupted after the Stonewall Inn was raided by police in New York City in 1969. Many historians say it was a huge turning point for gay rights.

However, in the years leading up to Stonewall, and after, there were other movements in Chicago where people were fighting for equality.

RELATED: Same-sex couples reflect on progress since the 1996 Defense of Marriage Act

Even before Stonewall, "There were definitely people that we're fighting back against institutional problems, including police and entrapment of gay men," said Tracy Baim, the co-publisher of the Chicago Reader and the co-founder of the LGBTQ publication, Windy City Times.

But Baim also knows quite a bit about another underground newsletter.

"There was a Mattachine Midwest Society that had a newsletter that would try to talk to people about their rights," Baim said.

The Mattachine Midwest newsletters were run by a secret society of gay people. They sent out urgent warnings about potential bar raids and other threats to the LGBTQ+ community. The newsletters were also in other cities nationwide.

"A lot of it was tips, and how to get legal protection, what your rights were if you were arrested, but in one incident, they actually went all-in and named the police officer who was doing the entrapment of gay men," Baim said.

That alleged entrapment resulted in arrests for lewd behavior.

"Drag queens, transgender people, lesbians, bisexuals, gay men would be swept up in these bar raids that would happen," Baim added. "I remember even covering them into the 1980s, and a lot of times they would happen around the time of elections."

Baim said Bill Kelly, one of the more high-profile 1960s Chicago gay activists, helped to lead the publication in Chicago. However, many others who ran the Mattachine Newsletter remained in the shadows.

The Legacy Walk -- built by Salvo's organization on Halsted -- honors well-known LGBTQ+ people who made large contributions to society, like Chicago's Jane Addams.

"And she helped start the ACLU. She is one of the most important Americans," Salvo said.

Lorraine Hansberry was a lesbian feminist activist and playwright. She wrote the American play "A Raisin in the Sun," which was the first play to be produced on Broadway by an African American.

"So, we owe a great deal of gratitude to a lot of those unsung heroes of our movement, and for me, it's about the people," Baim said.

Despite progress, activists want to remind people that gay and trans people are still victimized in hate crimes, and now new proposed laws by some states are targeting trans youth. In Chicago alone, almost 150,000 adults identify as LGBTQ, according to a 2018 study done by the city.

Reference material coordinated in conjunction with local LGBTQ+ archives and the ONE Archives Foundation.

The ONE Archives Foundation is the independent community partner that supports ONE National Gay & Lesbian Archives at the University of Southern California (USC) Libraries, the largest repository of Lesbian, Gay, Bisexual, Transgender, Queer (LGBTQ) materials in the world. Founded in 1952 as ONE Inc., the publisher of ONE Magazine, ONE Archives Foundation is the oldest active LGBTQ organization in the United States. In 2010, ONE Archives Foundation deposited its vast collection of LGBTQ historical materials with the USC Libraries. Today, the organization is dedicated to promoting this important resource through diverse activities including educational initiatives, fundraising, and range of public programs.